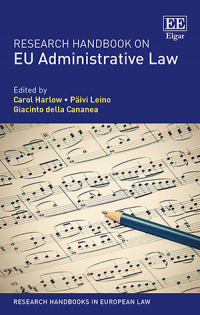 Examining the control functions of administrative law and the machinery for accountability, this Research Handbook eloquently challenges areas of authoritarian governance, such as the Eurozone and security state, where control and accountability are weak and tackles the seemingly insoluble question of citizen ‘voice’ and access to policy-making.

More Information
Critical Acclaim
Contributors
Contents
More Information
This Handbook uses a thematic and interdisciplinary approach to discuss and analyse the various governance structures of the EU, focusing in particular on how these are administered.

Key chapters, written by leading experts across the field, engage with important ongoing debates in the field of EU administrative law, focusing on areas of topical interest such as financial markets, the growing security state and problematic common asylum procedures. In doing so, they provide a summary of what we know, don’t know and ought to know about EU administrative law.

Examining the control functions of administrative law and the machinery for accountability, this Research Handbook eloquently challenges areas of authoritarian governance, such as the Eurozone and security state, where control and accountability are weak and tackles the seemingly insoluble question of citizen ‘voice’ and access to policy making.

Practical and engaging, this timely Research Handbook is sure to appeal to scholars and researchers of EU administrative law and EU law more broadly. Legal practitioners and EU policy makers will also benefit from its high level of engagement with contemporary deliberations.

Critical Acclaim
‘The essence of EU governance is unavoidably administrative. We must thank Harlow, Leino and della Cananea for pulling together these contributions exploring the administrative dimension of EU law and politics with such expertise, range and insight. The authors do not shy away from uncomfortable topics, whether it’s creeping authoritarianism or the challenges of top-down oversight or bottom-up participation. In a system becoming arguably more diffuse, fragmented, technocratic, and juristocratic by the day, this Handbook will serve as an essential tool for anyone who wishes to understand the nature of the integration project at this pivotal moment in its history.’
– Peter L. Lindseth, University of Connecticut, School of Law, US

‘Bold, fresh and impeccably researched, this invaluable book will allow the reader to understand the manifold sides of European Administrative Law, the most vital area of EU law. Leading scholars of this legal science, coordinated and edited by Carol Harlow, Giacinto della Cananea and Paivi Leino, have written twenty two essays on particularly relevant issues of European Administrative Law, achieving remarkable results. The book successfully combines long established topics, such as “accountability and control”, with other areas not yet fully explored, including “voice and citizenship” and, controversially, “resurgent authoritarianism”. The result is a formative Research Handbook, indispensable for students, scholars and European legal administrators. It provides new legal substance to the concept of “European Administrative Space”.’
– Mario P. Chiti, Emeritus Professor of Law, University of Florence and Jean Monnet Chair ad personam of European Administrative Law, LUISS University, Italy

‘The science of "European Administrative Law" has reached a level of maturity which is reflected by the fact that it is no longer solely the subject of more or less theoretical, exploratory works: it now merits the development of handbooks. Carol Harlow, Päivi Leino-Sandberg and Giacinto della Cananea have gathered to make this book one of the most expert authorities in the field. The themes are very well chosen, covering what are certainly the most critical issues in the area. The same is true of the concepts mobilised, with those conveyed by regulatory theory being particularly welcome. This Handbook will no doubt be a valuable instrument for students and researchers working on the still new, but increasingly well-recognized, field of “European Administrative Law".’
– Jean-Bernard Auby, Professor, Director of the Governance and Public Law Chair, Sciences Po Paris, France

'This book presents us with a rich collection or individual chapters with a pan-European outlook exploring core questions of legal research considering the accountability of the EU administration. It deserves to be widely read by scholars at all levels of seniority across Europe.'
– Common Market Law Review

‘The title is well described as both practical and engaging. It is also timely and of appeal to all academic and practitioner levels for researchers of European Union administrative law and EU law more broadly as the Great Repeal Act goes through Parliament in 2017 and we all face an uncertain future. Legal practitioners and EU policy makers mainly in the public sector will also benefit from its high level of what the editors describe as “engagement with contemporary deliberations”. That is exactly what you get with this important and brilliantly researched new book from Elgar. ’
– The Barrister Magazine

Part I Context and Theory
1. European Administration: Nature and Developments of a Legal and Political Space
Herwig C.H. Hofmann

3. Remarks on the Language of Administrative Law Scholarship in the EU
Matthias Ruffert

Part II The Work of Administration
4. Information Exchange and its Problems
Jens-Pieter Schneider

12. The Scope of EU Courts’ Jurisdiction and Review of Administrative Decisions – The Problem of Intensity Control of Legality
Mariusz Baran

16. The Right to Ask…The Right to Know – The Successes and Failures in Access to Documents Rules and Practices from an NGO Perspective
Liisa Leppävirta with Helen Darbishire

17. Judicial Review of EU Administrative Rules: to Lisbon and Beyond
Kieran Bradley

19. Administrative Due Process of Law in the Light of the Jurisprudence of EU Courts: A Quantitative and Qualitative Analysis
Laura Muzi