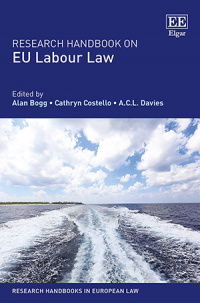 9781783471119 Edward Elgar Publishing
Research Handbooks in European Law series
Edited by Alan Bogg, Professor of Labour Law, University of Bristol Law School, Cathryn Costello, Andrew W Mellon Associate Professor of International Human Rights and Refugee Law, and a fellow of St Antony's College, University of Oxford and A.C.L. Davies, Professor of Law and Public Policy, and Dean of the Faculty of Law, University of Oxford, UK
Publication Date: 2016 ISBN: 978 1 78347 111 9 Extent: 608 pp
Research Handbook on EU Labour Law features contributions from leading scholars in the field. Part I addresses cross-cutting themes, such as the relationship between EU law and national law, the role of human rights in EU labour law, and the impact of austerity measures. In Part II, the contributors focus on topics in individual and collective labour law at EU level, including working time and job security. Finally, Part III offers a comprehensive overview of the EU’s interventions in equality law.

More Information
Critical Acclaim
Contributors
Contents
More Information
Globalisation of the economy and increased integration in Europe has led to a stronger focus on EU labour, employment and equality law. The Research Handbook on EU Labour Law draws together contributions from leading academics in this field at an important historic moment in its development. As well as assessing the ‘state of the art’, they identify key research questions for the future.

Split into four distinct parts, this Research Handbook provides a comprehensive examination of the major topics in EU labour, employment and equality law. Part One addresses cross-cutting themes, such as the relationship between EU law and national law, the role of human rights in EU labour law and the impact of austerity measures. The subsequent parts offer in-depth treatments of specific topics: Part Two focuses on various issues in individual and collective labour law at EU level, including working time and job security; Part Three provides an analysis of collective labour law, including its implications for trade unions and industrial democracy; and Part Four explores the EU’s interventions in equality law, considering its impact across a range of different protected characteristics.

Contemporary and far-reaching, the Research Handbook on EU Labour Law will prove to be an unrivalled reference work for academics and scholars seeking further understanding of EU labour, employment and equality law as well as further direction for ongoing research. Practitioners and policy-makers will also find it useful as a source of policy evaluation and theoretical perspectives.

Critical Acclaim
‘This Research Handbook brings together the expertise of an impressive array of scholars. Not only does the volume offer coverage of a broad range of key issues in contemporary European labour law, but fresh ideas and original insights. This book provides essential and exciting reading in a dynamic field of enquiry and debate.’
– Tonia Novitz, University of Bristol, UK

‘Labour law in the EU has developed incrementally. Its shape and scope has long been the subject of vigorous inquiry at the interface of law, politics and economics. Today its role is, if anything, even more keenly contested, as commitments to fundamental rights clash with political programmes stamped with austerity and deregulation. This rich collection does an extraordinarily fine job of tracing the rhythms and purposes of labour market regulation in the EU.’
– Stephen Weatherill, University of Oxford, UK

‘The editors of the Research Handbook on EU Labour Law have brought together, and enhanced with their strong introduction, a series of thoughtful contributions. The Research Handbook underscores the wide range of areas relevant to understanding the EU’s influence on contemporary labour law in Europe, by both evaluating the evolving social acquis and stressing the relevance of matters such as the migration acquis, the Euro-crisis and the EU and Council of Europe fundamental rights protection for European labour law.’
– Claire Kilpatrick, European University Institute, Italy

‘This is one of the latest titles in Edward Elgar’s ‘Research Handbooks in European Law’ series – and a timely publication it is, especially for UK scholars and practitioners.'
– The Barrister Magazine

Part 1 Cross-Cutting Themes
2. The EU’s Role in Labour Law: An Overview of the Rationales for EU Involvement in the Field
Phil Syrpis

3. The Interaction of EU Law and National Law: Between Myth and Reality
Jeremias Prassl

4. The Legacy of the Economic Crisis for Labour Law in Europe
Aristea Koukiadaki

5. The Role of the Social Partners
Ruth Dukes and Catriona Cannon

6. The Role of the Court of Justice in Labour Law
A.C.L. Davies, Alan Bogg and Cathryn Costello

8. Accession of the EU to the ECHR: The Permeative Power of Human Rights
Piet Eeckhout and Virginia Mantouvalou

11. EU Law and the Regulation of ‘Atypical’ Work
Nicola Kountouris

12. The Regulation of Working Time in Europe
Alan Bogg

15. The EU Framework of Information and Consultation: Implications for Trades Unions and Industrial Democracy
Wanjiru Njoya

20. Discrimination on the Grounds of Sexual Orientation and Gender Identity
Nicholas Bamforth

22. Pension Systems and Labour Law in the EU
Kendra Strauss