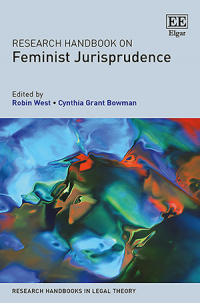 Featuring contributions from a diverse team of prominent scholars, this Research Handbook illuminates the ways in which feminist scholarship has enriched understandings of law’s sometimes subordinating structures and the ways in which law can be interpreted or changed so as to promote the equality, liberty, wellbeing, and interests of women. The expert contributors offer a vast range of feminist perspectives on law, including liberal, radical, and post-modern feminism, and explore the implications of these theoretical stances for understandings of the nature of law, legal change, and the relationship between law and politics. Chapters analyse the influence of feminist legal theories on doctrinal areas of law including US constitutional and civil rights law, international law, and various areas of private law.

This insightful book will be of interest to law students, legal scholars, and scholars of political and moral philosophy seeking to understand the entire body of feminist legal scholarship from the early 1970s to the present, as well as its variants, and relationships among different theoretical perspectives.
Critical Acclaim
‘The Research Handbook on Feminist Jurisprudence is a compelling, thought-provoking addition to academic library collections.’
– Caitlin Hunter, International Journal of Legal Information

‘The overview of feminist engagement with different areas of the law is impressive, and importantly demonstrates that even areas of law, which are written as “gender-neutral” norms, can benefit substantially from a feminist approach. Any law library would benefit from adding this Research Handbook to their catalogue.’
– Metka Potočnik, Wolverhampton Law Journal

‘This Research Handbook provides a diverse array of critical, descriptive, and normative perspectives on feminist jurisprudence, with rich historical accounts of legal advances and backlashes. Centered primarily on US feminism, the volume also includes interesting chapters with a foreign or international focus. It should prove a highly valuable resource for feminist scholars and advocates in many parts of the world.’
– Vicki C. Jackson, Harvard Law School, US

Introduction to the Research Handbook on Feminist Jurisprudence
Robin West

PART I FEMINISM AND LEGAL THEORY: VARIETIES OF FEMINIST LEGAL THEORY
1. In Defense of Liberal Feminism
Sylvia A. Law

10. Sexual Violence and the Law in India
Nivedita Menon

19. Beyond ‘Free Speech for the White Man’: Feminism and the First Amendment
Mary Anne Franks

22. How Feminism Remade American Family Law (and How It Did Not)
Susan Frelich Appleton