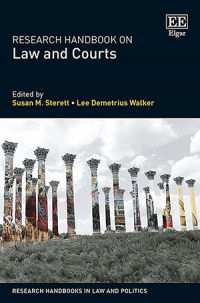 Research Handbook on Law and Courts

More Information
Critical Acclaim
Contributors
Contents
More Information
This comprehensive Research Handbook offers a multi-faceted analysis of the politics of law and courts and their role in governing. The authors develop new theoretical, empirical and methodological approaches to the study of law and courts as institutions, while accounting for the increasing diversity and complexity of the jurisdictions they
oversee.

The Research Handbook on Law and Courts features contributions from leading scholars in the United States, New Zealand, South Africa, Latin America and a number of European countries, enriching the scope of theoretical development in the field and identifying areas for future research. Chapters address courts’ centrality to governance by explaining how they participate in holding democratic administrations politically accountable, as well as by highlighting the political significance of court decisions concerning citizenship and inclusion. Chapters include studies of interactions between legal arguments, courts and other institutions that rely on law, as well as reflections on the physical and digital spaces of law. This volume also examines demographic diversity in judging before concluding with discussions of increasing digitization and computing power, and the significance of both for legal processes and sociolegal scholarship.

Scholars concerned with courts and political accountability in complex, multi-layered governance will find this Research Handbook an invaluable resource. Since courts and legal structures are increasingly significant around the world, the Research Handbook will also be useful to other social scientists concerned with inclusion, representation, and accountability through law.

Critical Acclaim
‘It's a distinct pleasure to see a research handbook that not only deals with classic themes in the literature, but which marks out new terrain for researchers in many different juridical and political regimes. The section on the digitalization of law and courts research was an eye-opener for me.’
– Chris Hanretty, Royal Holloway, University of London, UK

‘With a timely introduction followed by 32 chapters by no fewer than 50 established and early-career authors working in at least four continents, this Research Handbook represents today's most outstanding, global, and diverse scholarship on law and courts. The Research Handbook on Law and Courts synthesizes new ways that law and courts scholars encounter and study accountability, authoritarianism, populism, citizenship, diversity, democracy, gender, governance, technology, and the transformative potential of rights.’
– Mark Fathi Massoud, University of California, Santa Cruz, US

2. Degrees of Separation: judicial-executive relations in the US and Latin America
Gbemende Johnson

3. Comparing the Significance of War to High Courts of the USA, UK, and Canada
Susanne Schorpp

8. The Use of Precedent in U.S. Supreme Court Litigant Briefs
Jessica A. Schoeneherr and Ryan C. Black

12. Institutional Norms, Parliament, and the Courts: Explaining the Absence of Abortion Restrictions in Canada
Jonathan Parent

15. Judicial Service Commissions and the Appointment of Women to High Courts in Nigeria and Zambia
Jarpa J. Dawuni and Tabeth Masengu

17. The gender and judging project: equity in Germany
Ulrike Schultz

19. Understanding the determinants of opinion language borrowing in state courts in the United States
Jennifer Bowie and Elisha C. Savchak

20. State High Courts and Precedent: the diffusion of precedent in the United States
Ben Kassow

21. Letting the Outside In? Court Clerks, Discretion and the Shifting Boundary between Community and Court in Domestic Violence Cases in South Africa
Kelley Moult

25. Conflicts in Indigenous Law: Courts and Federalism in the United States and Common Law Nations
Rebecca A. Reid and Todd A. Curry

29. All Your Data Will Be Held Against You: Secondary Use of Data from Personal Genomics & Wearable Tech
Andelka M. Phillips

30. Data Infrastructure Innovation in the Field of Law and Courts: The European Court of Human Rights Database (ECHRdb)
Elizabeth Chrun and Rachel Cichowski