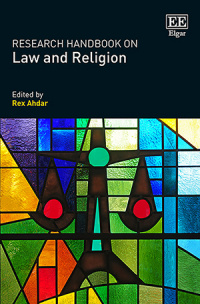 Research Handbook on Law and Religion

Providing in-depth, original analysis the book includes studies of a wide array of nation states, such as India and Turkey, which each have their own complex issues centred on law, religion and the interactions between the two. Longstanding issues of religious liberty are explored such as the right of conscientious objection, religious confession privilege and the wearing of religious apparel. The contested meanings of the secular state and religious neutrality are revisited from different perspectives and the reality of the international human rights protections for religious freedom are analysed.

Timely and astute, this discerning Research Handbook will be a valuable resource for both academics and researchers interested in the many topics surrounding law and religion. Lawyers and practitioners will also appreciate the clarity with which the rights of religious liberty, and the challenges in making these compatible with state law, are presented.

Critical Acclaim
‘This collection provides a worthy overview of key topics in this area and is an excellent starting point for further research on any of the issues covered. The editor is to be congratulated for bringing together such a high-quality collection from a wide range of brilliant scholars.’
– Neil Foster, International Journal for Religious Freedom

‘This Research Handbook offers an invaluable overview of a range of issues generated by the interaction of law and religion. The twenty-one essays featured are accessible and provide cutting-edge analysis on issues experienced by many jurisdictions (in particular, Australia, New Zealand, India, Canada, the US, the UK, Russia and Turkey). Naturally, the book combines assessments of constitutional law, the International Covenant on Civil and Political Rights (ICCPR) and the European Convention on Human Rights (ECHR). Subsequently, it advances insightful contributions for international and regional researchers of any experience and background.’
– Craig Allen, Ecclesiastical Law Journal

‘Rex Ahdar has gathered together 21 expert chapters covering a wide range of questions in the field. In his foreword, John Witte, Jr rightly characterizes these essays as ‘a judicious and delicious sampling’ (xviii). Without exception, they are well-written, thought-provoking and authoritative.’
– Julian Rivers, Oxford Journal of Law and Religion

‘Over the course of the last generation, the study of ‘law and religion’ has exploded in breadth, subtlety and significance. This Research Handbook provides its readers with a rich, varied, and sometimes provocative introduction to the field. Expert chapters not only shed new light on familiar topics, they also identify further avenues for fruitful scholarship. One is left with the sense that the most significant work still lies ahead – and also the intellectual tools to face that challenge.’
– Julian Rivers, University of Bristol Law School, UK

‘The authors who have contributed so ably to this excellent volume are to be congratulated on scholarship of the highest quality, which treats a wide and rich range of issues at the centre of the field of law and religion today. Their contribution here will be of enormous value to all those who teach, study, and practise in this rapidly developing and important sphere of life.’
– Norman Doe, Cardiff University, UK
Contributors
Contributors: R. Ahdar, F. Ahmed, R. Albert, R. Barker, B.L. Berger, J.E. Buckingham, J. Burnside, P. Dane, J. Harrison, M.A. Helfand, M. Hill, M. Kiviorg, A. Koppelman, I. Leigh, J.L. Neo, Y. Roznai, R. Sandberg, S.D. Smith, P.M. Taylor, H.-M. ten Napel, A.K. Thompson, F. Venter

2. The Sociological Dimension of Law and Religion
Russell Sandberg

4. Jeremy Bentham and the Problem of the Authority of Biblical Law
Jonathan Burnside

5. Dworkin’s Religion and the End of Religious Liberty
Joel Harrison

6. What Kind of Human Right is Religious Liberty?
Andrew Koppelman

10. Liberal Constitutionalism and the Unsettling of the Secular
Benjamin L Berger

11. The Boundaries of Faith-Based Organizations in Europe
Hans-Martien ten Napel

14. The Justiciability and Adjudication of Religious Disputes
Francois Venter

19. Of Burqas (and Niqabs) in Courtrooms: The Neglected Women’s Voice
Renae Barker

21. The Persistence of Religious Confession Privilege
A Keith Thompson