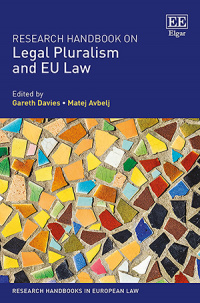 9781786433084 Edward Elgar Publishing
Research Handbooks in European Law series
Edited by Gareth Davies, Professor of EU Law, Department of Transnational Legal Studies, Faculty of Law, Vrije Universiteit Amsterdam, the Netherlands and Matej Avbelj, Associate Professor of European Law, Graduate School of Government and European Studies, Nova Univerza, Slovenia
Publication Date: 2018 ISBN: 978 1 78643 308 4 Extent: 448 pp
The Research Handbook on Legal Pluralism and EU Law explores the diversity of phenomenon of overlapping legal systems within the European Union, the nature of their interactions, and how they deal with the difficult question of the legal hierarchy between them. The contributors reflect on the history, sociology and legal scholarship on constitutional and legal pluralism, and develop this further in the light of the challenges currently facing the EU.

More Information
Critical Acclaim
Contributors
Contents
More Information
The Research Handbook on Legal Pluralism and EU Law explores the phenomenon of overlapping legal systems within the European Union, the nature of their interactions, and how they deal with the difficult question of the legal hierarchy between them. The contributors reflect on the history, sociology and legal scholarship on constitutional and legal pluralism, and develop this further in the light of the challenges currently facing the EU.

Addressing pluralism within policy areas such as EMU, migration, and external relations, and applying different perspectives – from the constitutionalist to the Foucauldian – this diverse collection of thinkers about EU law ask whether a pluralist perspective is part of the problem or part of the solution. Contributors offer both critical and positive assessments of the value of pluralist thinking in the EU whilst addressing major issues facing the EU now – Brexit, populism, migration, the Euro-crisis – and asking what lessons can be learned from and for pluralism.

This Research Handbook will be invaluable reading for legal academics specialising in EU law, EU constitutional Law, legal theory and political scientists focused on legal aspects of EU integration. Students on advanced courses in EU law and EU constitutional law, as well as judges at the Court of Justice and higher national courts, will also find this stimulating reading.
Critical Acclaim
‘This Handbook is a valuable contribution that codifies the efforts of many of the contributors of the movement, providing a certain coherence to the polyphony that characterized (and still characterizes) its members. Through twenty-three contributions ranging from “classics” of the movement to some of its most recent and promising voices, the book provides a holistic vision of the movement, including its critics as well.’
– Daniel Sarmiento, Common Market Law Review

Part I The Nature of European Legal Pluralism
2. Claim-Making and Parallel Universes: Legal Pluralism from Church and Empire to Statehood and the European Union
Poul F. Kjaer

4. From Pluralism to Perspectivism
Kaarlo Tuori

6. Constitutional Conflicts and Agonistic Pluralism: What Can We Learn From Political Theory?
Giuseppe Martinico

13. The Metabolic Constitution and the Limits of EU Legal Pluralism
Peter Lindseth

14. Of Politics and Pluralism: Governmentality and the EU Legal Order
Jessica Lawrence

15. The Pluralist Socio-economic Character of the European Treaties
Clemens Kaupa

Part IV The Practice of EU Legal Pluralism and its Future
16. Is there Room for Legal Pluralism in EU Relations with Third States? A Study of Nordic Approaches to European Integration
Päivi Leino and Liisa Leppävirta

17. Constitutional Pluralism and Judicial Adjudication: On Legal Reasoning, Minimalism and Silence by the Court of Justice
Suvi Sankari

21. Legal Pluralism in the European Regulation of Border Control: Disassembling, Diffusing, and Legalising the Power to Exclude
Galina Cornelisse