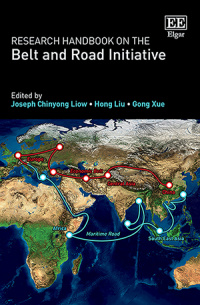 More Information
Critical Acclaim
Contributors
Contents
More Information
This timely Research Handbook investigates the radically transformative impact of the Belt and Road Initiative (BRI), addressing key questions regarding its economic, political and strategic consequences: What does the Chinese government hope to achieve with the BRI? How have recipient states responded? And what are its potential opportunities and risks?

Bringing together prominent international scholars and analysts, this Research Handbook arrives at a critical time in the infrastructural development of the BRI, shedding light on its influence in the future of global politics and economics. Chapters unpack the role of the BRI in Chinese foreign policy, placing infrastructural development at the centre of regional affairs, great power dynamics and economic and investment trends. Employing geopolitical and diplomatic modes of investigation, it offers critical and holistic views of the progress and challenges of the BRI’s implementation and its implications on the world stage.

Providing an innovative global viewpoint on the BRI, this Research Handbook offers cutting-edge perspectives for scholars and students of political science, particularly those investigating the latest developments in Chinese domestic and foreign policy. Its practical insights and broad empirical analysis will also benefit policymakers and think tank analysts working in the field.

Critical Acclaim
‘The book offers a timely series of studies on the BRI edited by three Singapore-based political scientists. The collection presents a solid read for students, scholars, policymakers, and other professionals interested in recent developments concerning the BRI. Practically, the editors aim to raise the Chinese government’s attention to the significance of adapting to multilateralism, which China has claimed it supports. Theoretically, through the lens of the BRI, the book explores the implications of a rising China on global governance across diverse fields. Finally, and specifically for geographers, the book should inspire greater exploration into the spatiality of BRI projects.’
– Xiaofeng Liu, Eurasian Geography and Economics

PART IV THE OVERLAND BELT
30 The BRI in Africa: change or continuity in China–Africa relations? 353
Linda Calabrese
31 China and the Middle East: venturing into the maelstrom 368
James M. Dorsey
32 Western Europe in the BRI 378
Jing Men
33 The Indo-Pacific as pushback against the BRI 390
Kaewkamol Pitakdumrongkit
34 ‘Not being absent’: China’s Polar Silk Road and the politics of identity 402
Marc Lanteigne
35 The BRI: fuelling strategic rivalry between China and the United States 414
Mingjiang Li
36 India, BRI and the emerging post-Galwan China outlook 424
Jagannath Panda
37 Conclusion: BRI, COVID-19 and the future 437
Joseph Chinyong Liow, Hong Liu and Gong Xue