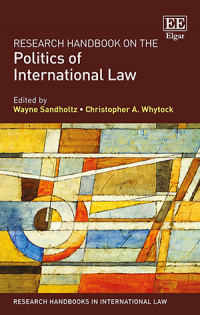 Research Handbook on the Politics of International Law

9781783473977 Edward Elgar Publishing
Research Handbooks in International Law series
Edited by Wayne Sandholtz, John A. McCone Chair in International Relations, University of Southern California and Christopher A. Whytock, Professor of Law and Political Science, University of California, Irvine, US
Publication Date: 2017 ISBN: 978 1 78347 397 7 Extent: 608 pp
What is the relationship between politics and international law? Inspired by comparative politics and socio-legal studies, this Research Handbook develops a novel framework for comparative analysis of politics and international law at different stages of governance and in different governance systems. It applies the framework in a wide range of fields—from human rights and environmental standards, to cyber conflict and intellectual property—to show how the relationship between politics and international law varies depending on the sites where it unfolds.

More Information
Critical Acclaim
Contributors
Contents
More Information
What is the relationship between politics and international law? Rather than exploring this question through the lens of the dominant paradigms of international relations theory – realism, liberalism and constructivism – this book proposes a different approach. Based on the premise that the relationship varies depending on the sites where it unfolds, and inspired by comparative politics and socio-legal studies, the book develops a novel framework for comparative analysis of politics and international law at different stages of governance and in different governance systems.

Expert contributors apply this analytical framework to diverse fields of law and politics. Part I examines the problems of compliance, effectiveness and the domestic enforcement of international law, and legal institutions including domestic and international courts, national legislatures and regime complexes. Part II covers substantive fields of governance such as global financial regulation, environmental standards, trade, intellectual property and human rights. The final chapters in this Part tackle emerging yet critical issues in international law, including terrorism, cyber conflict and Internet regulation.

Together, the chapters represent a significant step forward in the comparative analysis of politics and international law. This Research Handbook will be essential reading for students and academics in political science and law alike.
Critical Acclaim
The Handbook presents an excellent collection of research in a broad variety of contexts, with careful attention paid to separating out the many different facets of international law and its interrelation with politics. It provides a refreshing take on the study of international/global governance and a novel mid-range approach, reminding us that governance remains at all times a process, not homogenous but enacted across many sites of struggle and conflict.’
– David M Scott, Finnish Yearbook of International Law

‘This next-generation volume both consolidates a range of recent insights and sets an agenda for the study of the politics of international law. Moving beyond simple binaries of domestic/international, law/politics, and binding/non-binding, the editors and authors collectively elucidate a wide range of phenomena with a fresh perspective. The result is an essential starting point for international legal studies going forward.’
– Tom Ginsburg, University of Chicago, US

‘As the world becomes increasingly legalized, this Research Handbook on the Politics of International Law offers innovative guidance about how to understand law’s politics and effects. Sandholtz and Whytock construct a rigorous yet supple theoretical foundation for an excellent array of both conceptual essays and case studies on topics ranging from finance and trade to cyberconflict and human rights. The Research Handbook is an important theoretical contribution for anyone interested in the intersection of law and politics, which these days includes most of us.’
– Martha Finnemore, George Washington University, US

‘Sandholtz and Whytock have put together an outstanding collection of essays on the intersection of international law and politics. Focusing on stages and systems of governance, the editors illuminate sites in the international order where legal norms have a direct impact on politics. The volume also looks to the ways in which law and politics change and evolve at the global level as a result of continuing contestation. A must-read for students of global law and politics.’
– Anthony F. Lang, Jr, University of St Andrews, UK

1. The Politics of International Law
Wayne Sandholtz and Christopher A. Whytock

3. The Effectiveness of International Law and Stages of Governance
Rachel Brewster

PART II SITES OF GOVERNANCE
8. The Power of the Implementers: Global Financial and Environmental Standards
Walter Mattli and Jack Seddon

9. The European Court of Human Rights and the Politics of International Law
Mikael Rask Madsen

13. The "War" on Terror and International Law
Jordan J. Paust

15. Who Runs the Internet?
Anupam Chander