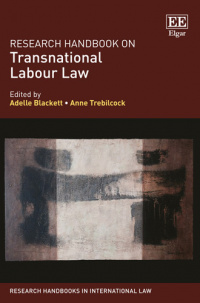 9781786437648 Edward Elgar Publishing
Research Handbooks in International Law series
Edited by Adelle Blackett, Professor of Law, Canada Research Chair in Transnational Labour Law and Development and Director of the Labour Law and Development Research Laboratory, McGill University, Canada and Anne Trebilcock, University of Göttingen (Institut für Arbeitsrecht), Germany and former Legal Adviser of the International Labour Organization
Publication Date: 2016 ISBN: 978 1 78643 764 8 Extent: 608 pp
The editors’ substantive introduction and the specially commissioned chapters in the Handbook explore the emergence of transnational labour law as a field, along with its contested contours. The expansion of traditional legal methods, such as treaties, is juxtaposed with the proliferation of contemporary alternatives such as indicators, framework agreements and consumer-led initiatives. Key international and regional institutions are studied for their coverage of such classic topics as freedom of association, equality, and sectoral labour standard-setting, as well as for the space they provide for dialogue. The volume underscores transnational labour law’s capacity to build bridges, including on migration, climate change and development.

More Information
Critical Acclaim
Contributors
Contents
More Information
The editors’ substantive introduction and the specially commissioned chapters in this Handbook explore the emergence of transnational labour law and its contested contours by juxtaposing the expansion of traditional legal methods with the proliferation of contemporary alternatives such as indicators, framework agreements and consumer-led initiatives. Key international (ILO, IMF, OECD) and regional (EU, IACHR, SADC) institutions are studied for their coverage of such classic topics as freedom of association, equality, and sectoral labour standard-setting, as well as for the space they provide for dialogue. The volume underscores transnational labour law’s capacity to build hard and soft law bridges to migration, climate change and development. The volume roots transnational labour law in a counter-hegemonic struggle for social justice.

Bringing together the scholarship of 41 experts from around the globe, this book encompasses and goes beyond the role of international and regional organizations in relation to labour standards and their enforcement, providing new insights into debates around freedom of association, equality and the elimination of forced labour and child labour. By including the influence of consumers in supply chains alongside the more traditional actors in this field such as trade unions, it combines a range of perspectives both theoretical and contextual. Several chapters interrogate whether transnational labour law can challenge domestic labour law’s traditional exclusions through expansive approaches to equality.

Academics, students and practitioners in the fields of labour law, international law, human rights, political science, transnational studies, and corporate social responsibility, will benefit from this critical resource, given the book’s eye-opening examination of labour governance in the contemporary economy.

Critical Acclaim
‘The list of 41 authors of this Handbook reads like a roll-call of the rising generation of scholars of labour law as well as a number of distinguished old hands. This is not a conventional textbook on transnational labour law but a series of short and stimulating essays on important current issues. It provides an invaluable guide for all those who want to think and write about the transnational influences that shape the modern world of work.’
– Sir Bob Hepple QC FBA, University of Cambridge, UK

6. Due Diligence on Labour Issues – Opportunities and Limits of the UN Guiding Principles on Business and Human Rights
Anne Trebilcock

9. Racism and the Regulation of Migrant Labour
Adrian A. Smith

10. China’s Challenge to Labour Law in both the Global North and the Global South
Sean Cooney

12. Pushback on the Right to Strike: Resisting the Thickening of Soft Law
Janice R. Bellace

19. Can Human Rights Based Labour Policy Improve the Labour Rights Situation in Developing Countries? A Look at Mexico and the Countries of Central America
Graciela Bensusán

C Emerging Roles for the ILO as an Actor in Transnational Labour Law
21. ILO Normative Action In Its Second Century: Escaping The Double Bind?
Francis Maupain

27. Diffusion and Leveraging of Transnational Labour Norms by the OECD
Jean-Marc Thouvenin

28. The Use of Arbitration to Decide International Labour Issues
Kathleen Claussen

B Beyond WTO Linkage: Emerging Directions and Social Regionalism
29. What The World Trade Organization Learned From The International Labour Organization
Steve Charnovitz

C The Transnational Challenge to the Regulation of Labour as a Factor of Production: on Commodification
34. Trading in Services – Commodities and Beneficiaries
Tonia Novitz

35. The Curious Incident of the ILO, Myanmar and Forced Labour
Brian Langille

36. The Implications of Preparatory Works for the Debate Regarding Slavery, Servitude and Forced Labour
Jean Allain