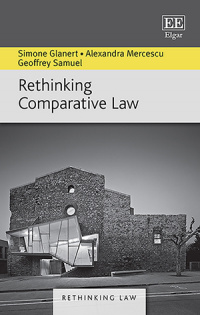 More Information
Critical Acclaim
Contents
More Information
As law’s institutional configurations stand, comparative law is a relatively new discipline. The first specialized journals and chairs, for example, go back a mere two hundred years or so. Yet, in its two centuries of institutional existence, comparative law has been the focus of much discussion, mostly by comparatists themselves reflecting on their practice. Indeed, some of this thinking came firmly to establish itself as a governing epistemology within the field.

This book holds that the time has nonetheless come, even for such a young venture as comparative law, to engage in a rethinking of its intellectual ways. Specifically, three comparatists hailing from different horizons investigate various assumptions and lines of reasoning that must invite reconsideration. The principal ambition informing the work is to optimize the interpretive rewards that the comparison of laws is in a position to generate.

Not limited to a particular country or jurisdiction, Rethinking Comparative Law aims to attract a large audience comprising students and scholars from diverse cultural backgrounds. Undergraduate or postgraduate law students and lawyers with an interest in comparative law will find the book helpful for a better appreciation of the many implications arising from the increased interaction with foreign law in a globalizing world.

Critical Acclaim
‘A fascinating and refreshing book on legal comparison! With much insight and depth, the three authors join forces, each one in four chapters, to offer new perspectives on how to engage seriously with the study of foreign law. Challenging the orthodoxy, the book offers fruitful reflections on the role of language and culture in law, and discusses questions of method, or the lack thereof, interdisciplinarity and other core questions of legal comparison, including that of the existence of law. The book will not only satisfy the curiosity of an academic audience, but also provide useful tools to international practitioners.’
– Franz Werro, Georgetown University Law Center, US, University of Fribourg, Switzerland and Co-Editor-in-Chief, American Journal of Comparative Law

‘Rethinking Comparative Law marks the urgency of a critical and heterodox approach to comparative legal studies. Stripping away from the hegemonic perspective in the field, which for more than a century has been content to compare the shells of laws, this work provides crucial tools for comparatists to pierce the carapace of foreign laws and perform in-depth analysis reaching to the very core of the foreign. An insightful and indispensable book for a culturalist view of the comparison of laws.’
– Daniel Wunder Hachem, Pontifícia Universidade Católica do Paraná and Universidade Federal do Paraná, Brazil

‘Rethinking Comparative Law is a valuable book on all the necessary and complex tools needed to manage legal reforms in a globalized world. The book makes an important and fresh addition to the literature on comparative law offering a new insight for a critical understanding of the notion of culture, which remains crucial for legal comparison. In so doing, the book represents a thoughtful and profound scrutiny of quantitative methods and their limits in legal analysis.’
– Pier Giuseppe Monateri, University of Torino, Italy
Contents
Contents: Introduction 1. The epistemological challenge: does law exist? 2. The comparatist and the illusion of autonomy 3. Methodology and comparative law: programme orientations 4. Method as deception 5. Comparisons otherwise: the merits of interdisciplinarity 6. Comparing comparisons 7. On the untranslatability of laws 8. The corrida, for example: how comparative understanding fares 9. How far culture? A critical examination of cultural defences 10. Comparison in action: on the beach 11. Quantifying law? ‘Legal origins’ or ‘doing business’ as usual 12. Is there generic law? The issue of constitutionalism Index
Add to Wish List
eBook for individuals
978 1 78643 947 5
From $40.00
Click here for options
eBook for library purchase
978 1 78643 947 5
View sample chapter and check access on: