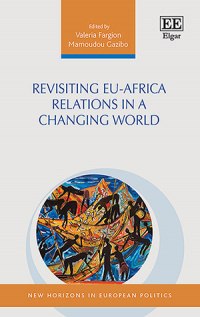 More Information
Critical Acclaim
Contributors
Contents
More Information
This timely book explores the current state of EU-Africa relations from a multidisciplinary perspective, placing emphasis on recent developments in five areas that are crucial for EU-Africa relations: development cooperation, trade, migration, security and democratization. It considers how Africa’s dependence on the EU has decreased due to the declining importance of development cooperation, and increasing cooperation with emerging powers, notably the BRIC nations.

The book asks two key questions in relation to these areas: first, whether the EU effectively pursues a forward-looking strategy suggested in the official discourse or is following a strategy that still reflects asymmetrical postcolonial relations; and second, whether Africa will be able to push for a more balanced relationship with Europe by using the leverage provided by emerging powers. To answer these questions, expert contributors explore the impact of African migration on the domestic policy of EU member states, security and conflict resolution in Africa, EU trade policy and African economic development, and how local dynamics and international pressures affect democratisation in Africa.

Offering new directions of research on EU-Africa relations, this book will be critical reading for scholars and students of international relations, European policy and international politics. It will also be a useful resource for policy makers, activists and civil society groups interested in EU-Africa cooperation.

Critical Acclaim
‘A remarkable analysis of the contradictions between the European political ambitions to be a global player in Africa and the unwillingness of the member states to develop a common African policy. The result is the huge gap between the original ambitions of Euro-African strategy and its concrete achievements, especially after the turmoil produced by the failure of the Arab Spring and the collapse of the Gaddafi regime. The ideal empty space for the increasing influence of China, now the only player at Continental level.’
– Romano Prodi, former President of the European Commission

‘The EU just adopted a revised strategy for its engagement with and in Africa. This volume offers insights by a wide range of scholars on the subject based on their long-time engagements. Officials in Brussels and on the ground are well advised to take note of the contributions in order to benefit in the same way that other scholars and practitioners will from the contributors' analyses.’
– Henning Melber, University of Pretoria, South Africa