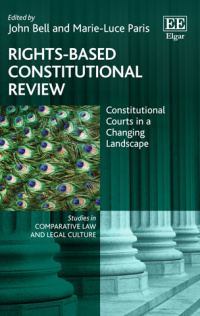 Constitutional Courts in a Changing Landscape

These original contributions, written by an array of distinguished experts and illustrated by the most up-to-date case law, cover Australia, Belgium, Finland, France, Hungary, Ireland, Italy, Spain, the United Kingdom and the United States, and include constitutional systems that are not commonly studied in comparative constitutional studies. Providing structured analyses, the editors combine studies of common law and civil law jurisdictions, centralized and decentralized systems of constitutional review, and large and small jurisdictions.

This multi-jurisdictional study will appeal to members of the judiciary, policymakers and practitioners looking for valuable insights into the case law of a range of constitutional and supreme courts in this rapidly expanding field of constitutional adjudication. It also serves as an excellent resource for academics, scholars and advanced students in the fields of law, human rights and political science.

Critical Acclaim
‘This collection is a timely survey of the role of constitutional courts in a comparative perspective – it provides an excellent summary of developments in a range of jurisdictions, and locates them in a broader social and political context. Among other factors, it considers global trends in increasing international and regional human rights protection, increased recognition of second and third generation rights, and a move towards decentralization in democratic governance. It is bound to be of broad interest to both comparative constitutional lawyers and scholars.’
– Rosalind Dixon, University of New South Wales, Australia

‘This collection provides a fresh picture of the situation of constitutional review in a broad set of jurisdictions. The chapters demonstrate powerful shifts towards a model of constitutional review to protect individual rights, but they also quite admirably elaborate on the tensions, divergences, pressures and triumphs in each country. A superb introduction to judicial review in an important set of countries.’
– Tom Ginsburg, University of Chicago, US

‘Bell and Paris have brought together a galaxy of talent to help comparative lawyers and political scientists understand the fast-moving world of rights-based review. Detailed chapters explaining recent developments in Ireland, the United Kingdom, Italy, Spain, Hungary, Belgium, France, Australia, Finland, and the United States provide a valuable introduction to those who seek to catch-up with developments, and a rich analysis of those developments for those already immersed in them. This is a most welcome addition to comparative constitutional scholarship.’
– Christopher McCrudden FBA, Queen’s University, Belfast, UK and University of Michigan Law School, US

‘This book is a very well-conceived and well-written overview on a recurrent topic in the constitutional law scholarship, in which the authors bring forward 'old' systems from 'new' perspectives, making comparative law all the more interesting and useful.'
– Romanian Journal of Comparative Law

Setting the Scene: Elements of Constitutional Theory and Methodology of the Research
Marie-Luce Paris

PART I BILLS OF RIGHTS AND ACTS OF INCORPORATION: US EXCEPTIONALISM AND ADAPTATION OF THE PARLIAMENTARY MODEL
1. The United States of America: A Comparativist Critique of US Judicial Review of Fundamental Rights Cases: Exceptionalisms, Paradoxes and Contradictions
Michel Rosenfeld

2. The United Kingdom: Rights-based Constitutional Review in the UK: From Form to Function
Chintan Chandrachud and Aileen Kavanagh

3. Ireland:
Leaving Behind the Commonwealth Model of Rights Review: Ireland as an Example of Collaborative Constitutionalism
Eoin Carolan

Adventures in the Grey Zone: Constitutionalism, Rights and the Review of Executive Power in the Migration Context
Matthew Zagor

7. Spain: The Spanish Experience of Rights-based Review or how Constitutional Case Law has been More Principled than Legislation in Defence of Fundamental Rights
Agustín Ruiz Robledo

9. Belgium: The Belgian Experience of Rights-based Review: Has the Constitutional Court Become a Body Subordinated to the European Court of Human Rights?
Marc Verdussen

10. Hungary: The Illusion of a Constitution in Europe: The Hungarian Constitutional Court after the Fifth Amendment of the Fundamental Law
Renáta Uitz