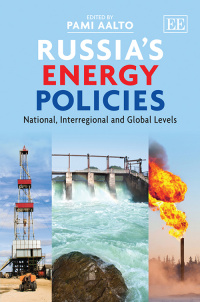 More Information
Critical Acclaim
Contributors
Contents
More Information
Russia's vast energy reserves, and its policies towards them have enormous importance in the current geopolitical landscape. This important book examines Russia’s energy policies on the national, interregional and global level. It pays particular attention to energy policy actors ranging from state, federal and regional actors, to energy companies and international financial actors and organizations. The book models the formation of Russia’s energy policies in terms of how energy policy actors perceive and map their policy environment.

The case studies cover federal, regional and environmental aspects of Russian energy policy, Russia’s energy relations with Europe and the CIS, North East Asia, the globalization of Russian oil companies and the political economy of Russian energy. It is found that there are several concurrent energy policies in contemporary Russia, and that this situation is likely to continue. These policies are conducted primarily from the business frame perspective while notions of energy superpower Russia are found more ambiguous.

Russia’s Energy Policies will benefit advanced master’s level students, doctoral students, researchers, policy-makers and practitioners. The book will be a great resource for advanced international relations, political economy, international business and globalisation courses alongside energy policy courses, as well as area studies courses on Russian, post-Soviet and European politics and environmental politics.
Critical Acclaim
‘The result is a multifaceted book, which is a pioneer in its field, useful for anybody who wishes to gain more in-depth knowledge about Russia’s energy policies, their formation and national and international influence. The numerous tables and maps are very helpful in this respect. . . This book opens up many important questions. . . hopes are that this book will function as a trigger for more studies in this fascinating and under researched field.’
– Anna Marhold, Oil, Gas and Energy Law Intelligence

‘Russia’s Energy Policies may not be just a recommendation, but a roadmap for the way to move forward.’
– Artur Tranzola Santos, e-International Relations

‘The book is a timely, thorough and balanced attempt to understand the complexities and strategic drivers influencing Russian policies in the areas of hydrocarbon extraction and delivery, which goes beyond the frequently encountered stereotypes. The authors are aware that they have studied policies which are continually evolving, but have provided a framework by which these movements can be traced and studied further.’
– Malcolm Hill, Journal of Contemporary European Studies

‘Russia is an increasingly important player in global energy markets, yet its policies are under-researched and little understood. This collection represents an important and sophisticated contribution to the debate. While much of the commentary on Russian energy consists of generalizations about Russia’s political strategy, this work lifts the lid and looks inside the process through which Russian energy policies are designed and implemented. It brings together essays by top specialists in the field, and makes a conscious effort to integrate the various disciplines of politics, economics and geography by developing a model of the “cognitive frames” through which the policy process is shaped. It addresses both domestic and international dimensions of the problem, and gives equal weight to traditional customers in Europe and new markets in Asia.’
– Peter Rutland, Wesleyan University, US

‘The book explains Russian energy policies, instead of a policy. It portrays a picture with multiple policy drivers, including institutional, regional and federal, environmental and commercial. The study markedly improves our understanding of the multifaceted nature of Russian energy policy, a topical and complex issue. This is a highly commendable book that should be included in the reading lists of anyone with an interest in the role of energy in Russia’s political economy or energy matters more generally.’
– Kim Talus, University College London, Australia

4. Russia’s East and the Search for a New El Dorado: A Comparative Analysis of Russia’s Kovytka, Sakhalin-2 and Chaiadinskoe Greenfield Projects
David Dusseault