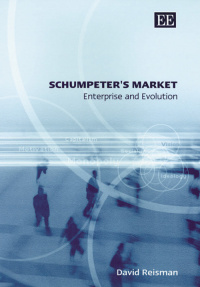 Examining the evidence from all of Schumpeter’s published work, the book fills a significant gap in the literature of economic thought. Partly because Schumpeter was so prolific, partly because he touched on so many interrelated topics, there have been few books that have sought to span the whole of this important author's influential insights.

More Information
Critical Acclaim
Contents
More Information
Schumpeter was an interdisciplinary political economist who made institutional transformation the centrepiece of his theory of supply and demand. This comprehensive monograph reconstructs and assesses Schumpeter’s contribution to the restless economics of entrepreneurship, disequilibrium and search.

Examining the evidence from all of Schumpeter’s published work, the book fills a significant gap in the literature of economic thought. Partly because Schumpeter was so prolific, partly because he touched on so many interrelated topics, there have been few books that have sought to span the whole of this important author's influential insights.

This volume will appeal to scholars, students and researchers who are interested in exploring the complexities of Schumpeter’s vision and his intellectual system. It will be entirely accessible to non-evolutionary economists. Historians of economic thought will find this a valuable and novel interpretation of Schumpeter’s work.
Critical Acclaim
‘David Reisman's book covers a broad expanse of history, economics and soci­ ology as it surveys the life and work of Joseph Schumpeter. The book makes delightful reading and should find friends both with novices to Schumpeter and to scholars. The writing is lucid as Reisman illuminates a broad terrain with admirable scholarship. . . Echoing the response of many to Schumpeter's work there is much to agree with and to disagree with in Professor Reisman's fine book.’
– Greg Mahony, Economic Issues

‘Reisman provides a clear and highly informative synthesis of the main elements of Schumpeter’s prolific output (comprising nine major books, more than two hundred papers and some ninety book reviews) and of the possibilities for its reconstruction as a unified whole . . . Above all, Reisman unpacks for a new generation why and how Schumpeter arrived at his evolutionary schema that capitalism’s success formed the foundations for its eclipse by socialism.’
– Rodger Middleton, Enterprise & Society

‘The author uses rich, evocative language to portray the sweeping reality of Schumpeter’s propositions. He strives to understand the enigma of the man and his diversity of thought, his command of many areas and unique insight into economic thought, without his being beholden to or constrained by a school of thought. The author displays wide-ranging knowledge that provides a pleasant backdrop against which to contrast Schumpeter’s offerings. Schumpeter is dedicated, diverse and a conundrum, very capable, but ever his own man; he is melancholic but divisive, wishing to be liked but set on pushing the boundaries. This insightful book is effective in coming to terms with a paradox and a master in the field.’
– Troy P. Lynch, History of Economics Review

‘David Reisman’s book, Schumpeter’s Market, is a welcome addition to this growing field of research on Schumpeter’s work and his influence on modern day economics. . . This book will be a reference to economists interested in the complexities of Schumpeter's work, especially in so far as markets, firms and evolution are concerned.’
– Frederic Sautet, EH.Net

‘This is exactly what everybody who is interested in economics needs: a short and brilliant book about Joseph Schumpeter, the ever interesting enfant terrible of Austrian economics who is currently experiencing a true renaissance. David Reisman does a wonderful job in Schumpeter’s Market, emphasizing the strong unity of Schumpeter’s vision as well as his truly innovative contribution to evolutionary economics. A must read not only for economists but for everybody interested in live, economic thought!’
– Richard Swedberg, Cornell University, US
Contents
Contents: 1. Introduction 2. Schumpeter’s Vision 3. The Prediction of Change 4. The Capitalist Economy 5. Corporate Capitalism 6. The Sociology of Capitalism 7. The Socialist Economy 8. Market and Plan 9. The Sociology of Socialism 10. Continuity and Change 11. Continuity, Change and Socialism 12. The Macroeconomics of Success 13. The Cycle 14. Conclusion References Index
Add to Wish List
eBook for individuals
978 1 84542 085 7
From $40.00
Click here for options
eBook for library purchase
978 1 84542 085 7
View sample chapter and check access on: