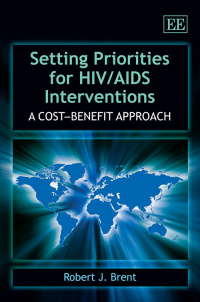 9781847203311 Edward Elgar Publishing
Robert J. Brent, Professor of Economics, Fordham University, New York, US
Publication Date: June 2010 ISBN: 978 1 84720 331 1 Extent: 240 pp
HIV/AIDS is much too complex a phenomenon to be understood only by reference to common sense and ethical codes. This book presents the cost–benefit analysis (CBA) framework in a well-researched and accessible manner to ensure that the most important considerations are recognized and incorporated.