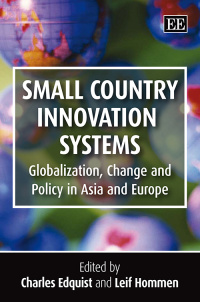 More Information
Critical Acclaim
Contributors
Contents
More Information
This major book presents case studies of ten small country national systems of innovation (NSIs) in Europe and Asia, namely, Denmark, Finland, Hong Kong, Ireland, the Netherlands, Norway, Singapore, South Korea, Sweden and Taiwan. These cases have been carefully selected as examples of success within the context of globalization and as ‘new economies’ where competition is increasingly based on innovation.

To facilitate comparative analysis the ten studies follow a common structure, informed by an activities-based approach to describing and analysing NSIs, which addresses the critical issues of globalization and the consequences of innovation for economic performance. The final chapter compares ‘fast growth’ and ‘slow growth’ countries, concentrating on issues of innovation policy. The results illustrate the usefulness of an activities-based approach to studying NSIs, point to distinctive national roles within an increasingly differentiated international division of labour and address the key themes of ‘selectivity’ and ‘coordination’ in innovation policy.

This valuable book presents one of the most significant, comprehensive and comparative country studies of NSIs in the last decade. It will have great import and should be widely read by every serious student and scholar of innovation studies.
Critical Acclaim
‘What are the challenges that small countries face concerning innovation and what are the effects of globalization on their innovation systems? In this very interesting, rich and timely book, Edquist and Hommen compare ten different small national innovation systems from the Asia Pacific and Northern Europe that are rather advanced in their development. The answers that the authors give are convincing and relate not only to the unique characteristics of each national system that shapes innovative activity, but also to some commonalities that exist across these countries.’
– Franco Malerba, Bocconi University, Italy

Handbook of Research on Artificial Intelligence in Human Resource Management