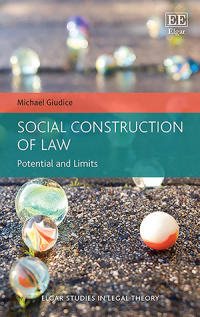 More Information
Critical Acclaim
Contents
More Information
This illuminating book explores the theme of social constructionism in legal theory. It questions just how much freedom and power social groups really have to construct and reconstruct law.

Michael Giudice takes a nuanced approach to analyse what is true and what is false in the view that law is socially constructed. He draws on accounts of European Union law as well as Indigenous legal orders in North America to demonstrate the contingency of particular concepts of law. Utilising evidence from a range of social and natural sciences, he also considers how law may have a naturally necessary core. The book concludes that while law would not exist without beliefs, intentions, and practices, it must always exist as a social rule, declaration, or directive; much, but not all, of law is socially constructed.

This book will be a valuable resource for academics and students of law and philosophy as well as researchers interested in the intersections between analytical legal theory, socio-legal studies, and empirical legal studies.

Critical Acclaim
‘This is an excellent overview of conceptual explanations of law, and a bold attempt to deal with one of the more well-established truisms within law and the humanities.’
– Erin Buckley, Law in Context

‘Giudice attempts to reconcile two positions seemingly in tension: that law is a social construction, yet it has a natural core. Law is both a social artifact and a natural kind (of a sort). When making this argument, he demonstrates that conceptual analysis must be supplemented by causal analysis, drawing on sociology, anthropology, behavioral neuroscience, and other scientific disciplines, as well as by moral and political analysis. His thesis and his method chart potentially fruitful paths for the next stage of analytical jurisprudence. This is a fascinating, ambitious, and important work.’
– Brian Z. Tamanaha, Washington University in St. Louis, US

‘Michael Giudice shows again the subtlety and clarity of thought we have come to expect from his work. This book is indispensable for anyone interested in understanding law, whether and how it is socially constructed, the method for understanding it, or the relation between its nature and our concept of it.’
– Kenneth M. Ehrenberg, Co-Director, Surrey Centre for Law and Philosophy, UK

‘For many years now, Michael Giudice has been an important and unique voice, reforming analytical jurisprudence from the inside. With this astute new book, Giudice once again shows, with his customary clarity and elegance, why it is vital to balance and relate analytical, empirical and normative aspects of theorising law.’
– Maksymilian Del Mar, Queen Mary University of London, UK
Contents
Contents: Preface 1. Introduction PART I THE SOCIAL CONSTRUCTION OF LEGAL SYSTEM 2. Social constructionism and legal theory 3. Conceptual views and political commitments 4. The idea of legal system: one thought too many? PART II NATURAL LIMITS TO LAW’S SOCIAL CONSTRUCTION 5. Conceptual space for a natural core 6. Empirical evidence for social source normativity 7. Methodological implications 8. Conclusion Index