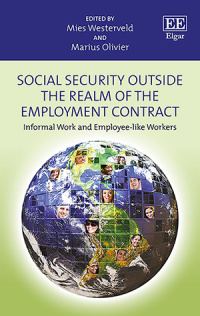 Social Security Outside the Realm of the Employment Contract

9781788113397 Edward Elgar Publishing
Edited by Mies Westerveld, Faculty of Law, University of Amsterdam, the Netherlands and Marius Olivier, Law School, University of Western Australia, Perth and Faculty of Law, North-West University, South Africa
Publication Date: 2019 ISBN: 978 1 78811 339 7 Extent: 296 pp
All over the world countries face the challenge of inadequate social security coverage for workers without an employment contact. In countries of the global south, this phenomenon is a natural consequence of large informal economies. Countries in the global north increasingly witness the same issue, due to growing labour market flexibility (flex contracts, dependent self-employment, digitization of labour). In this book authors from both hemispheres exchange insights, experiments and practices with the intention of finding better ways to deal with the social security challenges facing workers.

More Information
Critical Acclaim
Contributors
Contents
More Information
Over recent years, the inability of social security protection to reach workers without a formal employment contract has become an inconvenient reality in both the global north and south. This book explores how provisions for income security can be revised to effectively meet the needs of the labour force in varying economies.

In developing economies, informal employment has traditionally accounted for a high proportion of overall employment and this trend looks set to continue. In the global north, the increasing use of flex-contracts and ‘dependent self-employment’ has led to a rise in the number of workers with limited income protection. An additional challenge for countries in both hemispheres is the rise of the ‘gig’ economy. This book is the first to open up a dialogue about social security coverage in the developed and developing world. Authors from both sides of the divide have contributed chapters and present a variety of insights, experiments and practices with the aim of identifying better ways to combat the growing social security challenge.

Academic researchers with an interest in labour law and social policy will find this book to be an engaging source of innovative research. Practicing lawyers and policy makers will also benefit from the insights and examples provided from a number of different jurisdictions.
Critical Acclaim
‘This edited collection tackles an important subject, and its well-evidenced discussion should be regarded as an important contribution to a debate that will be increasingly important as employment markets continue to diversify.’
– Citizens Basic Income Trust
Contributors
Contributors: C. Barnard, A. Blackham, E. Fourie, A. Govindjee,T. Gyulavári, L. Jianfei, A. Johansson Westregård, L. Lamarche, J. Li, J. Masabo, M. Olivier, P.A. Ortiz, A. Paz-Fuchs, M. Westerveld, M. Wynn

3. Gender and Race in the Informal Economy: the South African Framework
Elmarie Fourie

4. The Self-employed and the Welfare State in the EU: Insights from Gender and Race Equality Law
Alysia Blackham and Catherine Barnard

8. Structure and Social Protection of the Self-employed Society: An Eastern-European Perspective based on Hungarian Experience
Tamás Gyulavári

9. Informality and Social Insurance in East Africa: an Assessment of the Law and Practice
Juliana Masabo

11. The Netherlands: Solo Self-Employment and Labour on Demand
Mies Westerveld

12. From a Social Protection Regime to an Income Security Agenda: Canada at the Crossroads
Lucie Lamarche