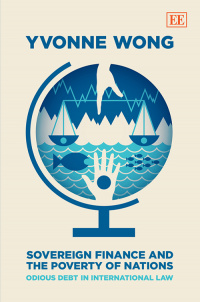 Sovereign Finance and the Poverty of Nations

More Information
Critical Acclaim
Contents
More Information
National debts incurred by illegitimate regimes against the best interests of the citizens is a serious problem of international economics and politics. These sovereign debts, often referred to as odious debts, deplete the public purse and create an ongoing financial liability that serves to constrain investment and economic growth, and conspires to keep millions in poverty. This important and timely book explains the legal principles and politics involved in the issue of odious debts, and sovereign debt arrangements more generally. The author goes beyond abstract arguments and proposes legal rules and international regulation that should be put in place to create the right incentives to stop the transmission of odious debts. Her proposal is for a registration scheme for sovereign debt, and the imposition of positive duties on financiers who provide loans to sovereign borrowers.

Sovereign Finance and the Poverty of Nations will appeal to students, academics, debtactivists, policymakers, international finance practitioners and anyone with a general interest in sovereign finance affairs.
Critical Acclaim
‘In what is a very timely contribution to the literature, Yvonne Wong critically revisits the origins of the international law concept of odious debt and its evolution. . . written in a very clear and concise manner. . . Wong’s book is a very timely and highly stimulating contribution to a branch of the literature whose substantial development began only a few years ago. It is expected that readers both familiar and unfamiliar with the concept of odious debt will find this book to be an enjoyable, insightful read which is definitely worth the reader’s time.’
– Claus D. Zimmermann, Leiden Journal of International Law

‘Wong surveys the nature of odious debt; the legal framework of sovereign debt in general; and proposals to deal with the odious debt problem in the context of an international framework or convention. She proposes private lawsuits against creditors investing in odious debt, in return for a share in the proceeds of any recoveries. A very worthwhile treatment of an unusual but important topic. Highly recommended.’
– I. Walter, Choice

‘Yvonne Wong’s book is one of the best treatments of the odious debt problem in the literature. It is thorough, balanced and yet manages to be creative. I have already used an early version in my international debt class and the discussions that were generated were excellent. For anyone seeking to tackle this age old problem, I highly recommend this book.’
– Mitu Gulati, Duke University, US

‘With some excellent historical research and important analysis of “odious debt” accumulation and sovereign debt restructuring mechanisms in modern times, this book is placing the issue of “odious debt” at the heart of International law. Thus, it will prove an indispensable companion to any scholar or policy-maker who wishes to gain a multi-prismatic understanding of “odious debt” illegality and its implications for the welfare of entire nations.’
– Emilios Avgouleas, University of Edinburgh, UK

‘Whenever a strict application of the law produces a result that is at variance with a general sense of what is morally right, trouble is surely in the offing. This is the central thesis of Yvonne Wong’s Sovereign Finance and the Poverty of Nations. When is it legally permissible, when is it ethically acceptable, for a sovereign borrower to disavow a debt incurred in the name of the sovereign state, but not for its (or its citizens’) benefit? And if debts incurred by unscrupulous politicians in one era can be disowned by their successors later on under gauzy notions of “illegitimacy” or “odiousness”, what will prevent future unscrupulous politicians from casually dishonoring sovereign obligations that they would just prefer not to pay? These are deep waters, legally and morally. Wong has given us a fascinating insight into one of the most disquieting issues in international financial law.’
– Lee C. Buchheit, Cleary Gottlieb Steen & Hamilton LLP, US

‘This book provides a very valuable contribution to the discussion about odious debts in that it, quite successfully, structures the often rather elusive argumentation. By developing a new and stringent approach to the emergence of a valid legal concept of odious debts, the author presents a fresh perspective to its underlying evaluations and allows, thus, a re-consideration of the need for effective rules in this context. This book will certainly influence fundamentally the future debate of odious debts.’
– Christoph G. Paulus, Humboldt-Universitat zu Berlin, Germany

‘Saddam Hussein was overthrown and executed, but his successors to power are still liable for the debts that he contracted for the nation. Odious regimes can create debts without consent or benefit of their citizens who must subsequently repay them. This fact puzzles both international law specialists and intellectuals who read magazines like The Economist. The
result seems wrong, but the right solution is elusive. Yvonne Wong’s important and timely book solves some of the puzzles by using methods and theories from international law, economics, and political science. It explains the law and politics inherent in sovereign debt arrangements, and proposes a new legal framework for odious debt.’
– From the foreword by Robert Cooter
Contents
Contents: Foreword by Robert Cooter Introduction 1. The Odious Debts Doctrine: An Overview 2. Sovereign Debt and its Legal Framework 3. History of Sovereign Debt 4. Sovereign Debt and the Poverty of Nations 5. A New Era for International Finance 6. Justifications for a Law Banning Odious Debts 7. Current Ideas for How the Odious Debts Doctrine Could Apply in Practice 8. The New Approach Odious Debts Doctrine (NAODD) 9. Concluding Remark Index
Add to Wish List
eBook for individuals
978 0 85793 503 8
From $40.00
Click here for options
eBook for library purchase
978 0 85793 503 8
View sample chapter and check access on: