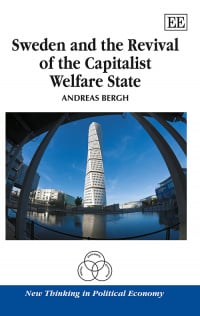 Sweden and the Revival of the Capitalist Welfare State

9781783473496 Edward Elgar Publishing
New Thinking in Political Economy series
Andreas Bergh, Lund University and Research Institute of Industrial Economics, Sweden
Publication Date: 2014 ISBN: 978 1 78347 349 6 Extent: 168 pp
This book tackles a number of controversial questions regarding Sweden’s economic and political development:
• How did Sweden become rich?
• How did Sweden become egalitarian?
• Why has Sweden since the early 1990s grown faster than the US and most EU-countries despite its high taxes and generous welfare state?

More Information
Critical Acclaim
Contents
More Information
For some, Sweden is proof that a generous welfare state is fully compatible with a growing competitive economy. For others, it is a frightening example of what big government can do to a once thriving economy. Sweden and the Revival of the Capitalist Welfare State tackles a number of controversial questions regarding Sweden’s economic and political development: How did Sweden become rich? How did Sweden become egalitarian? Why has Sweden since the early 90s grown faster than the US and most EU-countries despite its high taxes and generous welfare state?

The author uses new research on institutions and economic reforms to explain the rise, the fall and the recent revival of the Swedish welfare state. The central argument is that a generous welfare state like that of Sweden can work well, provided that it is built on well-functioning capitalist institutions and economic openness. The book expertly explains how Sweden developed from a poor and highly unequal society to one of the richest and most egalitarian countries in the world by building a universal welfare state on a capitalist foundation. It also engages in an important discussion about the current and future challenges for the welfare state in general.

The book will fit well in introductory and advanced courses on welfare state policy, social work, sociology, economic history, institutional economics and political science. In all these disciplines, the case of Sweden has always provoked interest and debate, due to Sweden’s combination of prosperity, equality and extensive welfare state. The rapid pace of change in Sweden over the last 25 years, however, means that most other books are descriptively dated.

Critical Acclaim
‘Sweden has a remarkable political culture that marries market liberalism and social democratic sensibilities. Bergh's fine book helps us get beyond a sense of paradox in that.’
– Daniel Klein, George Mason University, US
Contents
Contents: 1. Introduction 2. Prosperity and equality: The golden years 1870-1970 3. The ‘not quite so golden’ years 1970 – 1995 4. The return of the capitalist welfare state 5. The capitalist welfare state’s bloc-transcending history 6. The consequences of increasing competition 7. The resilience of labor market regulation and rent control 8. Challenges ahead: Can the capitalist welfare state survive? Appendices Bibliography Index
Add to Wish List
eBook for individuals
978 1 78347 350 2
From $35.16
Click here for options
eBook for library purchase
978 1 78347 350 2
View sample chapter and check access on: