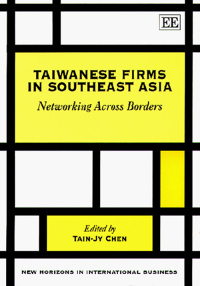 Taiwanese Firms in Southeast Asia provides a comprehensive review of Taiwan’s direct investment in Southeast Asia, including Indonesia, Malaysia, Thailand, the Philippines and Vietnam. It also explores the motivation behind investment in Asia, Europe and the US. In most countries, incidence of foreign direct investment is positively correlated with firm size. However, in Taiwanese firms, the opposite is true. The book examines the reasons for this and assesses the difference in practice between small and large firms conducting foreign direct investment, focusing on the manufacturing sector. The book also includes an original, comprehensive survey and a series of interviews with Taiwanese parent firms and their subsidiaries in Southeast Asia. The authors conclude that networking underscores the core competitiveness of Taiwanese firms and when these firms invest abroad, they attempt to maintain a close connection with domestic networks to retain competitiveness and flexibility. However, they will have difficulty in sustaining this in the long-term because co-ordination of production across national borders requires intensive input of managerial resources which are scarce among Taiwanese firms. In the long-term, they have to localize and integrate themselves into the local networks.

The book is a result of joint research efforts by Taiwanese, American and Southeast Asian scholars and will be required reading for students and scholars of economies in Southeast Asia, international business, Asian studies and multinational enterprise.
Critical Acclaim
‘Rather one of the merits of this book is that it brings up numerous issues calling for further research. This work has opened the way and set down a solid foundation for future research, for which I would like to express to the contributors of this study my fullest approval and gratitude.’
– Yukihito Sato, The Developing Economies

‘The strength of this book lies in the solid empirical data it presents, in the effectiveness of the network approach, and in the comparative perspective which makes it a useful reference for students interested in both FDI and business networking in East and Southeast Asia.’
– Hong Liu, China Information