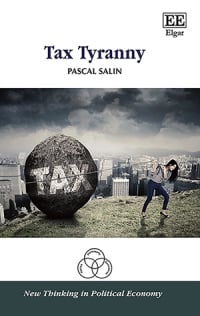 9781789907025 Edward Elgar Publishing
New Thinking in Political Economy series
Pascal Salin, Honorary Professor, University Paris-Dauphine, France and former President of the Mont Pèlerin Society
Publication Date: 2020 ISBN: 978 1 78990 702 5 Extent: 224 pp
Tax Tyranny does not aim to give a description of existing tax systems, rather it provides readers with the intellectual instruments which enable them to understand the role of taxation in the workings of economic systems and to evaluate the fairness of taxes.

More Information
Critical Acclaim
Contents
More Information
Tax Tyranny does not aim to give a description of existing tax systems, rather it provides readers with the intellectual instruments which enable them to understand the role of taxation in the workings of economic systems and to evaluate the fairness of taxes.

Critical Acclaim
‘This book remains a must for all those who want to have a clear view on modern tax systems, on the damages they create, and on the kind of opposition that sensible reform projects are going to meet.’
– Enrico Colombatto, The Independent Review

‘The book is written in a non-technical way and accessible to a broad readership. It serves very well as an introductory text for undergraduates, most notably in macroeconomics or public economics, but it also carries a lot of original food for thought that deserve the attention of scholars and tax practitioners.’
– Jörg Guido Hülsmann, The Quarterly Journal of Austrian Economics

‘This is a broad-ranging book about the many problems of tax, and one that manages the difficult task of being very knowledgeable about taxation, both the theory and practicalities, whilst also being very readable.’
– Richard Teather, Adam Smith Institute

‘Tax Tyranny satisfies the objective it sets itself with aplomb. It offers a superb challenge to the many received wisdoms in tax theory and design and rightly homes in on three fundamental and interrelated problems with tax: its inescapably arbitrary and unfair nature, the discriminatory and capricious character of progressiveness, and the economically ruinous consequences of converting savings and investment into consumption.’
– Rory Meakin, Economic Affairs

Contents
Contents: Introduction 1. The Destructive Nature Of Taxes 2. The Myth Of Progressive Taxation 3. The Overtaxation Of Capital 4. Immoral And Harmful : Inheritance Taxes 5. The Cascade Of Taxes 6. Capitalism In Peril 7. Freeing Savings 8. A Firm Does Not Pay Taxes 9. Choosing One's Life 10. A European Single Market Without Tax Harmonization 11. Taxes For Which State ? 12. Consent To Taxation? Conclusion Index