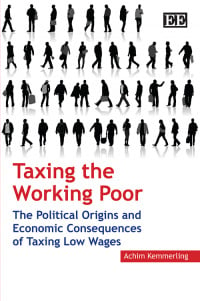 The Political Origins and Economic Consequences of Taxing Low Wages

9781847207784 Edward Elgar Publishing
Achim Kemmerling, Willy Brandt School of Public Policy, Universität Erfurt, Germany
Publication Date: 2009 ISBN: 978 1 84720 778 4 Extent: 168 pp
In most industrialized countries the tax burden of poor people has increased dramatically over the last few decades. This book analyses both the political origins of this increase and its consequences for the labour market.

More Information
Critical Acclaim
Contents
More Information
In most industrialized countries the tax burden of poor people has increased dramatically over the last few decades. This book analyses both the political origins of this increase and its consequences for the labour market.

This interdisciplinary account of the political economy of taxing low wages explains the historical and structural origins of political tensions between different types of workers and their effects on the performance of labour markets. As such, it will strongly appeal to a wide-ranging audience, including academics, students and researchers with a special interest in political science, political economy, labour markets and the economics of taxation. Practitioners in the field of labour market, social and tax policies interested in the normative consequences of taxation for the labour market will also find the book to be of great interest.
Critical Acclaim
‘Kemmerling deftly intertwines the efficiency theory of taxation with the political basis of taxing the working poor. . . This commendable effort in interdisciplinary study and the comparative analysis of taxation is an essential reference for undergraduate and graduate students, as well as faculty and professionals of economics, political science, and taxation systems of Europe.’
– S. Chaudhuri, Choice

‘Taxing the Working Poor is an inspiring read for political scientists and economists interested in the relationship between taxation and employment. Based on an elegant combination of econometric analysis and historical case studies, it shows that the alleged trade-off between employment and progressive taxation has political rather than economic roots.’
– Philipp Genschel, Jacobs University Bremen, Germany

‘What are the economic and political forces which generate different regimes of tax on labour? What are the implications for the labour market of these different regimes? And does globalisation bring a halt to tax-based redistribution? Achim Kemmerling tackles these and other important questions in this significant book.’
– Malcolm Sawyer, University of Leeds, UK

‘We have been distracted from the detailed problems of financing the welfare state by the tired old twentieth-century debate between libertarian tax minimisers and maximal socialist collectivisers. We have to move on. The welfare state has to be accepted and the detailed problems of taxation to sustain it have to be addressed. This well-researched and fascinating book addresses the political and institutional origins of different tax systems and points to viable strategies of redistribution and reform.’
– Geoffrey M. Hodgson, University of Hertfordshire, UK
Contents
Contents: Preface 1. Introduction 2. A Comparative Welfare State Analysis of Tax Mixes 3. The Economics of Taxing Labour 4. Political Economy Applied to Tax Mixes 5. Empirical Evaluation 6. Conclusion: Employment and Redistribution are Not Incompatible Bibliography Index
Add to Wish List