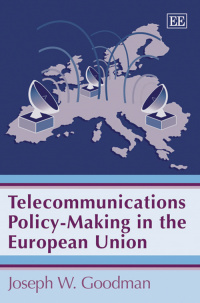 Telecommunications Policy-Making in the European Union

9781843768067 Edward Elgar Publishing
Joseph W. Goodman, Visiting Scholar, BMW Center for German and European Studies, Georgetown University and Associate, Skadden, Arps, Slate, Meagher & Flom, LLP, US
Publication Date: 2006 ISBN: 978 1 84376 806 7 Extent: 320 pp
Examining the emergence of a European Union telecommunications policy, Joseph Goodman explains how and why the policy developed as it did and why certain reforms in the sector were easier to achieve than others. He provides a history of the key actors in the policy-making process from the first attempts by the national postal, telegraph, and telecommunication administrations to coordinate their telecommunications policies in the 1950s, to the implementation of a comprehensive EU telecommunications regulatory structure in 1998 and the development of a new regulatory structure in 2003.

The analytical framework employed by the author draws upon new institutionalism and actor-based approaches, providing an opportunity to evaluate the utility of a synthetic approach for examining and explaining EU policy-making. The focus of his analysis is on the European Commission’s two-pronged strategy of liberalisation and harmonisation, which began in the late 1980s and culminated in an important milestone on January 1st 1998, when the EU Member States fully opened their telecommunications markets to competition. He concludes that a synthetic approach, which enables the researcher to apply a number of approaches to multiple settings and various levels of analysis, is useful – even necessary – in understanding and explaining the many dimensions of EU policy-making.

This authoritative study will be of interest to all those in the telecommunications industry – including attorneys, consultants, and lobbyists – who would like to know how the EU’s policy developed. It will appeal, more generally, to political scientists and scholars of European history and politics.
Critical Acclaim
‘This book offers a good study of the development of telecommunications policy by the EU. . . Great value to those interested in understanding both European telecommunications policy and more generally in how policy-making operates in the EU.’
– Mark Thatcher, West European Politics