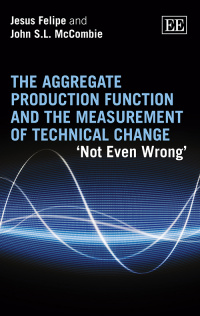 The Aggregate Production Function and the Measurement of Technical Change

The authors explain why, despite the serious aggregation problems that surround it, aggregate production functions often give plausible statistical results. This is due to the use of constant-price value data, rather than the theoretically correct physical data, together with an underlying accounting identity that relates the data definitionally. It is in this sense that the aggregate production function is ‘not even wrong’: it is not a behavioural relationship capable of being statistically refuted. The book examines the history of the production function and shows how certain seminal works on neoclassical growth theory, labour demand functions and estimates of the mark-up, among others, suffer from this fundamental problem.

The book represents a fundamental critique of the aggregate production function and will be of interest to all macroeconomists.
Critical Acclaim
‘This is an extremely important and long-awaited book. The authors provide a cogent guide to all that is wrong with the theory and empirical applications of the discredited notion of an aggregate production function. Their critique has devastating implications for orthodox macroeconomics.’
– Anwar Shaikh, New School for Social Research, US

‘“There are none so blind as those who will not see.” For decades now John McCombie and Jesus Felipe have been publishing papers which draw out the implications of the conceptual vacuousness that characterises fitting aggregate production function specifications to data to test the validity of the marginal productivity theory of distribution, a critique first developed by Henry Phelps Brown and Herbert Simon. By careful empirical and theoretical work, they have reached the conclusion that the huge literature on aggregate production functions and technical progress is “not even wrong” because predictions cannot be tested, that they are only variations on manipulations of national accounting identities. Perhaps this time it really will be “different”, the scales will fall from the profession’s eyes. I certainly hope so.’
– G.C. Harcourt, Jesus College, Cambridge, UK and University of New South Wales, Australia

‘This is a very important book. Proofs that aggregate production functions do not exist have been around for more than 50 years. This casts doubt not only on macroeconomic theory but also on empirical work and policy. Yet, this has not deterred macro-economists. The authors show in great detail that the apparent “fit” of such functions to value-based data is a tautology and not a proof that such aggregates exist. One hopes that the profession will finally take note.’
– Franklin M. Fisher, Massachusetts Institute of Technology, US

‘Felipe and McCombie have gathered all of the compelling arguments denying the existence of aggregate production functions and showing that econometric estimates based on these fail to measure what they purport to quantify: they are artefacts. Their critique, which ought to be read by any economist doing empirical work, is destructive of nearly all that is important to mainstream economics: NAIRU and potential output measures, measures of wage elasticities, of output elasticities and of total factor productivity growth.’
– Marc Lavoie, University of Ottawa, Canada, and University of Paris 13, France