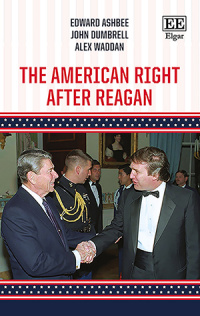 The American Right After Reagan

9781788114790 Edward Elgar Publishing
Edward Ashbee, Professor (MSO) in American Politics and Policy, Department of International Economics, Government and Business, Copenhagen Business School, Denmark, John Dumbrell, Professor of Government, Durham University, (retired) and Alex Waddan, Associate Professor in American Politics and American Foreign Policy, University of Leicester, UK
Publication Date: 2019 ISBN: 978 1 78811 479 0 Extent: 224 pp
This timely and significant book provides a comprehensive overview of right-wing ideology and policy-making in the years since Ronald Reagan left office. The authors assess the ways in which the Reagan legacy, rather than the empirical realities of his tenure, has impacted economic, social and cultural policy formation and conservative efforts at reshaping the United States. Against this background, they provide an explanation for why the Republican party turned towards Donald Trump.

More Information
Critical Acclaim
Contents
More Information
This timely and significant book provides a comprehensive overview of right-wing ideology and policy-making in the years since Ronald Reagan left office, and an explanation of the reasons why the Republicans, the ‘party of Reagan’, turned towards Donald Trump.

The authors assess the ways in which the Reagan legacy, rather than the empirical realities of his tenure, has impacted economic, social and cultural policy formation and conservative efforts at reshaping the United States. They also evaluate the changing relationships between different ideological currents on the right. Against this background, The American Right After Reagan discusses Trump’s insurgent populism and the profound tensions that have marked his presidency.

This thought-provoking book will prove invaluable to scholars in political science and American Studies, in particular those studying US domestic or foreign policy during this period. It will also provide useful insights for those seeking to understand the recent rise of right-wing populism and Trump’s ascendancy.

Critical Acclaim
‘Three eminent scholars offer a cogent but nuanced analysis of the successes and frustrations of the American right since the 1980s. Their insightful perspectives on conservatism's policy and political development over the last quarter-century builds up to a riveting assessment of the Trump administration's contributions to and deviations from the cause. Engagingly written and very well researched, this volume should be essential reading for scholars and students of America's contemporary politics and recent political history.’
– Iwan Morgan, University College London, UK

‘The American Right After Reagan measures the aftershocks of the "Reagan revolution" in comprehensive and often counterintuitive ways, mapping where the philosophical and substantive shifts of the 1980s still hold sway and where they have eroded. The book pushes well beyond the standard dogma of the era, and brings sharp theoretical analysis as well as a wide range of empirical scholarship to bear on key aspects of contemporary policymaking and partisanship. In so doing the authors settle some old arguments – but better yet, spark many new ones.’
– Andrew Rudalevige, Bowdoin College, US

‘In The American Right After Reagan, three distinguished scholars – Edward Ashbee, John Dumbrell and Alex Waddan – examine the legacy of Ronald Reagan. In a wide-ranging work, conservative ideology and the Republican Party record on economic and social policy, the “culture wars”, and foreign affairs are explored. This book, one of the very best histories of modern conservatism in America that I have read, explains with verve and perspicacity how the development of Republican Party politics since Reagan culminated in the election of Donald Trump. In sharp contrast to the idea that Trump's presidency has been orthodox in terms of policy, these authors make a forceful argument that Trump in fact represents an important break from conservative traditions since Reagan. This book will be of great interest to students, scholars and the general public. I recommend it with enormous enthusiasm and admiration.’
– Mark White, Queen Mary University of London, UK
Contents
Contents: 1. Introduction: the legacy of the Reagan revolution 2. Economic policy: reconfiguring the supply - side 3. Drowning government in the bathtub: restructuring social provision 4. Conservative foreign policy: Reagan to Trump 5. The right and the ‘culture wars’ 6. The impact of the populist challenge 7. The Trump Administration 8. Afterword Index