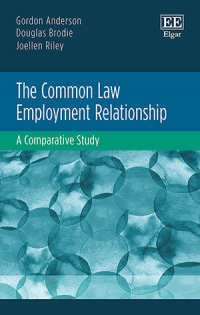 9781783479696 Edward Elgar Publishing
Gordon Anderson, Faculty of Law, Victoria University of Wellington, New Zealand, Douglas Brodie, Professor, School of Law, University of Strathclyde, UK and Joellen Riley, Sydney Law School, University of Sydney, Australia
Publication Date: 2017 ISBN: 978 1 78347 969 6 Extent: 288 pp
The contract of employment provides in many jurisdictions the legal foundation for the employment of workers. This book examines how the development of the common law under the influence of contemporary social and economic pressures has caused this contract to evolve.

More Information
Critical Acclaim
Contents
More Information
The contract of employment provides in many jurisdictions the legal foundation for the employment of workers. This book examines how the development of the common law under the influence of contemporary social and economic pressures has caused this contract to evolve.

International employment law experts provide a comparative study of the contract of employment across three closely related common law jurisdictions: the UK, Australia and New Zealand. Adopting a thematic approach, they analyse the key facets of the common law of employment such as who is an employee, the implied duties of employees and the restraints on employee mobility. Examining the interaction between common law and domestic statutory law and the politics and labour relations systems, this book considers the legal variations for each jurisdiction and its response to new developments in employment. It addresses the capacity of the common law to respond to contemporary developments such as the ‘gig’ economy and the increasingly intrusive surveillance of employees, both at work and in their private lives.

Insightful and contemporary, this book will appeal to students and scholars of employment and contract law as well as those studying comparative law more widely. Practitioners involved in employment policy or employment litigation will also benefit from the wealth of up-to-date knowledge on common law trends and developments.
Critical Acclaim
‘A masterful, comprehensive comparison – not lacking in normative content – of the commonalities and differences in judge-made employment law in Australia, New Zealand, and the United Kingdom, with occasional glances at Canada. It sweeps across the employment relationship exploring the intricate dialogue between courts and legislatures. Threaded throughout is the judicial treatment of managerial prerogative in the wake of legislative change. The book is a key source for students of comparative employment law.’
– Matthew W. Finkin, University of Illinois at Urbana-Champaign, US

‘The law of the employment contract and relationship has been and remains a very fruitful subject for comparative research and writing as between Common Law jurisdictions. Gordon Anderson, Douglas Brodie, and Joellen Riley have, by taking a deeply combined perspective upon this topic from Australia, New Zealand, and the United Kingdom, made a very significant and historically intelligent contribution to the existing literature.’
– Mark Freedland, University of Oxford, UK
Contents
Contents: Preface Table of Cases Table of Statutes 1. Introduction 2. Development and character of the contract of employment 3. Defining the employee 4. Changing and alternative modes of employment 5. Statutory and incorporated terms 6. Fairness of the bargain and allocation of risk 7. Fidelity, mutual trust and confidence and fair dealing 8. The work/personal interface 9. Employee mobility 10. Security in Employment 11. Common Law Remedies 12. Conclusions Index