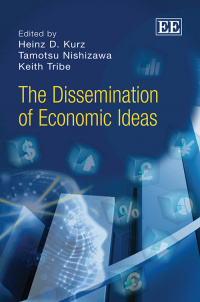 The Dissemination of Economic Ideas

More Information
Critical Acclaim
Contributors
Contents
More Information
This highly illuminating book marks a significant stage in our growing understanding of how the development of national traditions of economic thought has been affected by both internal and external factors.

The expert contributors set an explicit agenda for the study of the dissemination of economic ideas across four centuries, acknowledging that the history of dissemination is also a history of the flux of economic beliefs, rendering any generalisation difficult, if not impossible. Topics explored include systems of political economy, European and American interactions, the diffusion of economic ideas in South-Eastern Europe and beyond, and the exchange of ideas between Japan and the rest of the world.

This book will prove a fascinating and stimulating read for scholars and researchers in the field of economics generally, and more specifically in heterodox economics, the history of economic thought and economic theory.
Critical Acclaim
‘This book is highly recommended for the richness and novelty of its case studies. Leaving aside the positive contribution made in enhancing our understanding of Japanese economic thought, by giving voice to economic traditions that had been previously neglected, and by showing the complexity of the interaction between the ‘centers’ of economic theorizing and the ‘periphery,’ the book has a great capacity to raise deep questions on the ways in which economic ideas originate, travel, adapt, and eventually become institutionalized.’
– Gerardo Serra, Journal of the History of Economic Thought

PART I: SYSTEMS OF POLITICAL ECONOMY
1. Cameralism as an Intermediary between Mediterranean Scholastic Economic Thought and Classical Economics
Bertram Schefold

2. The Ideal Statesman: The Influence of Richelieu on Davenant’s Political Thought
Seiichiro Ito

3. Polizei and the System of Public Finance: Tracing the Impact of Cameralism in Eighteenth-Century Portugal
Alexandre Mendes Cunha

PART III: THE DIFFUSION OF ECONOMIC IDEAS IN SOUTH-EASTERN EUROPE AND BEYOND
7. The Dissemination of Economic Thought in South-Eastern Europe in the Nineteenth Century
Michalis M. Psalidopoulos and Nicholas J. Theocarakis

8. Adventures of an Austrian Trio Ahead: The Influence of Schumpeter, Polanyi and Hayek in Turkey and the Dissemination of their Work
Eyüp Özveren

PART IV: THE EXCHANGES OF IDEAS BETWEEN JAPAN AND THE REST OF THE WORLD
9. The Diffusion of Economic Ideas: Lionel Robbins in Italy and Japan
Atsushi Komine and Fabio Masini

12. Was Sozialforschung an Aesopian Term? Marxism as a Link between Japan and the West
Kiichiro Yagi