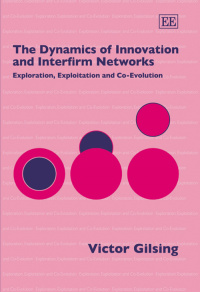 The Dynamics of Innovation and Interfirm Networks

9781845422738 Edward Elgar Publishing
Victor Gilsing, Tilburg University, The Netherlands
Publication Date: 2005 ISBN: 978 1 84542 273 8 Extent: 224 pp
This book aims to understand how sectoral dynamics condition learning and innovation activities within interfirm networks. To do so, a dynamic model of co-evolution at a sectoral level is developed, differentiating between a setting of exploration and exploitation.

More Information
Critical Acclaim
Contents
More Information
This book aims to understand how sectoral dynamics condition learning and innovation activities within interfirm networks. To do so, a dynamic model of co-evolution at a sectoral level is developed, differentiating between a setting of exploration and exploitation.

In analysing this co-evolutionary process, two views on organisation are combined; a competence view and a governance view. This combination of competence and governance yields a more complete view of interfirm relations. Based on this, The Dynamics of Innovation and Interfirm Networks analyses in-depth two Dutch knowledge-intensive industries: multimedia and pharmaceutical biotechnology. The book demonstrates that a general pattern of co-evolution can be identified for both industries. How this co-evolutionary process settles in a specific combination of network structures and coordination mechanisms varies across the two industries. In this way, the book makes an important contribution to explaining why key features of innovation networks vary with exploration and exploitation, as well as across different industries.

Academics, specifically those interested in the dynamic interaction between networks and innovation, will find this book of great interest, as will policymakers and management practitioners
Critical Acclaim
‘In the vast and growing literature on networks, this book is extremely timely and addresses the right issues. Victor Gilsing’s book is a jewel. It guides us through the maze of networks, with lightness, brilliance and conviction. The book excels in explaining which type of network is best suited to deal with a particular innovation task. This is achieved by providing a clear and thorough theoretical analysis which combines institutional and evolutionary economics, as well as a remarkable empirical analysis based on multimedia and biotechnologies. Gilsing succeeds in further exploring the multiple dimensions of the well known notion of ties between economic units in a network (not only the strength of ties but also the duration, density, frequency), and thus brings a new perspective on the classical notions of exploration and exploitation. We learn that a network in exploitation generally favors a non-dense structure made up of strong ties, whereas the key-question with regard to organizing for exploration is not “how to combine specialization and integration” but rather “how to combine diversity and selection”. This book has strong implications for firms when developing a strategy on how to structure their network, where to position such a network and which role it should play. The attempt to acquire an endogenous understanding of the origins of novelty in networks of firms, and to shed light on the mechanisms that generate variety in our economic system is a coup de maître.’
– Patrick Cohendet, the University Louis Pasteur of Strasbourg (France) and HEC Montréal (Canada), and co-founder and member of the BETA research lab in Strasbourg

‘This is a path-breaking study on the evolution of knowledge, learning, and innovation within networks of firms. It focuses on the institutions that influence interfirm learning and how networks of firms affect their institutional environment. It studies the implications of these co-evolutionary processes for networks of firms and their coordination, from both a competence and governance perspective. The significant contribution of the study lies in the insight resulting from the dynamic and evolutionary approach to the study of innovation systems, all too rare in the literature. The book combines and applies ideas and concepts from evolutionary economics and social network theory. Case studies of the innovation systems for multimedia and biotechnology in the Netherlands provide useful illustrations. Students of evolution and learning in innovation systems and networks will not want to miss this important work.’
– Bo Carlsson, Case Western Reserve University, Cleveland, Ohio, US

‘In the past decades firms have started to realize that strategic alliances and interfirm networks have become a key competitive weapon. In spite of the vast amount of publications on alliances and networks, the specific interaction between sectoral characteristics, learning regimes and innovation networks has been ill understood. This important publication fills this void by providing an original and thorough framework that enables us to understand exploration, exploitation and co-evolution of networks. This work is a must-read for academics and managers alike.’
– Geert Duysters, Eindhoven University of Technology, The Netherlands
Contents
Contents: Foreword 1. Introduction 2. Selection by the Institutional Environment 3. Learning Regimes 4. Co-evolution of Institutional Environment and Learning Regimes 5. Implications from the Co-Evolutionary Process 6. Methodology 7. The Dutch Multimedia System of Innovation 8. The Dutch Pharmaceutical Biotechnology System of Innovation 9. Conclusions References Index
Add to Wish List
eBook for individuals
978 1 78195 892 6
From $40.00
Click here for options

Resilience and the Management of Nonprofit Organizations