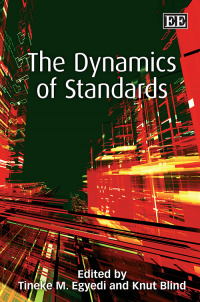 The Dynamics of Standards

9781847204868 Edward Elgar Publishing
Edited by Tineke M. Egyedi, Delft Institute for Research on Standardization, the Netherlands and Knut Blind, Faculty of Economics and Management, Technische Universität Berlin and Innovation and Technology Transfer department, Fraunhofer Institute for Open Communication Systems (FOKUS), Germany
Publication Date: December 2008 ISBN: 978 1 84720 486 8 Extent: 232 pp
This book addresses the new field of standards dynamics. It focuses in particular on the tension between standards and change. Standards are points of reference and should therefore be inherently stable (at least to a certain degree). However, technologies change at an increasing pace, particularly in the field of information technology (IT).

More Information
Critical Acclaim
Contributors
Contents
More Information
This book addresses the new field of standards dynamics. It focuses in particular on the tension between standards and change. Standards are points of reference and should therefore be inherently stable (at least to a certain degree). However, technologies change at an increasing pace, particularly in the field of information technology (IT). This requires the development of more standards and more updates, and leads to increased competition between standards. In many situations problems arise, such as how to retain compatibility if standards keep on changing and whether to adopt the new version. If standards are related, how does changing one standard affect the others? The contributing authors gathered here analyse the causes and scale of change in order to demonstrate how to prevent, reduce and cope with its negative impact.

Addressing a number of highly up-to-date issues including the sustainability of documents and data, this book will be of great interest to those concerned with innovation, management of technology and the emerging field of standardization studies. In addition, standard-setting organizations and policymakers should be aware of the ambivalence of standards dynamics.
Critical Acclaim
‘The economics of standards has grown from being a rather arcane speciality into a major issue in industrial economics, strategy and technology policy. This collection of empirical papers is edited by two researchers that have made important contributions to that literature. Their particular focus is on what they call “standards dynamics”: what happens to standards after they have been developed. This is welcome, because that particular issue has been largely ignored in the literature so far.’
– Peter Swann, Nottingham University Business School, UK

‘This book ventures into an unexplored area of standards research. Building on empirical research it addresses the lives of standards. Most standards do not remain stable after they have been established but unfold an often unexpected dynamics of change with more or less desirable consequences. Contributions to this volume – by experienced economists, social scientists, engineers and computer scientists – provide an interdisciplinary basis for understanding the cause and impact of standards dynamics. Intriguing questions and convincing responses reveal the practical and the scientific implications of change. An excellent collection of articles!’
– Raymund Werle, Max Planck Institute for the Study of Societies

‘This is an important new book that directly addresses probably the most significant and long-standing lacuna in our understanding of standards . . . In many respects, the contributors set out a new paradigm for the investigation of standards. They open the door to new kinds of questions about the function and role of standards in rapidly changing technological and business environments and new approaches to the investigation of standardization phenomena. The scientific implications will be far reaching.’
– From the foreword by Richard Hawkins
Contributors
Contributors: K. Blind, R. Dawson, T.M. Egyedi, S. Gauch, P. Heijnen, K. Jakobs, M. Kaart, T. King, A. Loeffen, S. Probets, M. Soares, J.W. Thomas, K. van der Meer, J. Vrancken
Contents
Contents:

PART I: THE PROBLEM OF CHANGING STANDARDS
2. The Sustainability of Digital Data: Tension Between the Dynamics and Longevity of Standards
Kees van der Meer

3. An Implementation Perspective on Sources of Incompatibility and Standards’ Dynamics
Tineke M. Egyedi

8. A Case Study of the Adoption and Implementation of STEP
Josephine W. Thomas, Steve Probets, Ray Dawson and Tim King

PART IV: SCALE OF CHANGE
9. How Stable are IT Standards?
Tineke M. Egyedi and Petra Heijnen