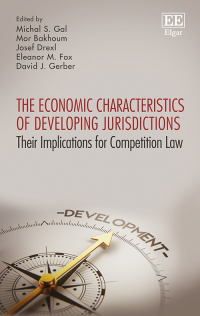 The Economic Characteristics of Developing Jurisdictions

Their Implications for Competition Law

9781783471492 Edward Elgar Publishing
Edited by Michal S. Gal, Professor and Director, Center for Law and Technology, University of Haifa, Israel, Mor Bakhoum, Max Planck Institute for Innovation and Competition, Josef Drexl, Director, Max Planck Institute for Innovation and Competition, Munich, Germany, Eleanor M. Fox, Professor of Law Emerita, Walter J. Derenberg Professor of Trade Regulation Emerita, New York University School of Law and David J. Gerber, Chicago-Kent College of Law, Illinois Institute of Technology, US
Publication Date: 2015 ISBN: 978 1 78347 149 2 Extent: 424 pp
There is ongoing debate as to what competition law and policy is most suitable for developing jurisdictions. This book argues that the unique characteristics of developing jurisdictions matter when crafting and enforcing competition law and these should be placed at the heart of analysis when considering which competition laws are judicious. Through examining different factors that influence the adoption and implementation of competition laws in developing countries, this book illustrates the goals of such laws, the content of the legal rules, and the necessary institutional, political, ideological and legal conditions that must complement such rules. The book integrates development economics with competition law to provide an alternative vision of competition law, concluding that ‘one competition law and policy size’ does not fit ‘all socio-economic contexts'.

A number of different factors that influence the implementation of competition law in developing countries are analysed, such as the content and goals of such laws, the institutional features, and the political, ideological and legal conditions that must complement law and policy. Experts in the fields of development economics and competition law discuss the key economic features that characterize most developing jurisdictions, determine how these unique characteristics influence law and policy and define how this must translate into competition law. Through this interdisciplinary exploration, the book illustrates how unique characteristics of developing jurisdictions matter when enforcing competition law.

Critical Acclaim
‘This book – an edited collection of contributions by distinguished development economists and competition law specialists – develops a powerful case against a “one size fits all” approach to designing competition laws for developed and developing countries. With respect to the latter, differences in economic characteristics require re-thinking of the traditional objectives and instruments of intervention adopted by competition laws. . . This impressive volume substantially advances the research and public policy-making agenda in this hitherto under-attended area of law and development.’
– Michael Trebilcock, University of Toronto, Canada

3. Lifting the Veil: Rethinking the Classification of Developing Economies for Competition Law and Policy
Tamar Indig and Michal S. Gal

7. The Informal Economy and its Interface with Competition Law and Policy
Mor Bakhoum

13 Abuses of Dominance in Developing Countries: A View from the South, With an Eye on Telecoms
Javier Tapia and Simon Roberts