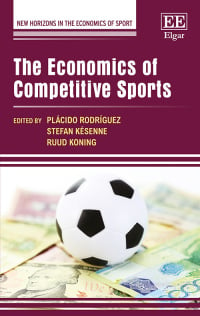 The Economics of Competitive Sports

9781783474752 Edward Elgar Publishing
New Horizons in the Economics of Sport series
Edited by Plácido Rodríguez, University of Oviedo, Spain, the late Stefan Késenne, formerly University of Antwerp and KU Leuven, Belgium and Ruud Koning, University of Groningen, the Netherlands
Publication Date: 2015 ISBN: 978 1 78347 475 2 Extent: 240 pp
The essence of any sports contest is competition. The very unpredictability of a sporting outcome distinguishes it from, say, an opera performance. This volume presents a state of the art overview of the economics of competitive sport along two main themes. In the first part, the discussion centers on the organization of sports and competition. The second part deals with the competitive balance, rewards and outcomes of the actual contests.

More Information
Critical Acclaim
Contributors
Contents
More Information
Competition is the very essence of professional sports, yet how do we measure it? Has the level of competition changed over time? Can organizers influence the degree of competition, for example, by changing rewards? How does the audience appreciate competition? The Economics of Competitive Sports examines and addresses these questions.

This volume presents a state-of-the-art overview of the economics of competitive sport with contributions from leading experts in the field. The initial chapters present a discussion of the organization of sports and competition, exploring how leagues form, operate and compete. The second part of the book deals with the competition, rewards and outcomes of actual organized leagues and contests. Competitive balance and responses to incentives are covered extensively.

Academics, policymakers and students seeking an in-depth and practical understanding of the economics of competition in sport will find this volume indispensible.

Critical Acclaim
‘In the 21st century, Edward Elgar has been, in this reviewer's opinion, the go-to publishing house when it comes to virtually any aspect of the economics or business of sports. The total is now larger by one with the addition of Economics of Competitive Sports.'
– Choice

‘True to their title, Rodríguez, Késenne, and Koning assemble a top-notch cast to delve broadly and deeply into the economics of competitive sports. There is something here for everybody, from the organization of competition (tournaments; federations; rival leagues), to its results (competitive balance; career durations; medals), to its challenges (club survival; fan misbehavior). Anyone interested in solid and insightful economic analysis of sports competition should have this one on their shelf.’
– Rodney Fort, University of Michigan, US

PART I ORGANIZATION OF SPORTS AND COMPETITION

2. The Pyramid Market of the European Sports Model: The Economics of Federations
Fernando Tenreiro

3. The English Disease: Has Football Hooliganism been Eliminated or just Displaced?
Colin Green and Robert Simmons

4. Where to Play First (Away or Home) in a Best-of-two Tournament? An Analysis from UEFA Competitions
Carlos Varela-Quintana, Julio del Corral and Juan Prieto-Rodríguez

11. Economic Prediction of Sport Performances from the Beijing Olympics to the 2010 FIFA World Cup in South Africa: The Notion of Surprising Sporting Outcome
Wladimir Andreff and Madeleine Andreff