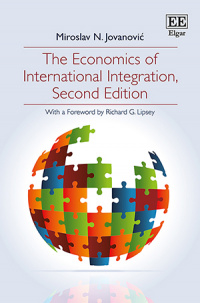 9781781954522 Edward Elgar Publishing
Miroslav N. Jovanović, Dušan Sidjanski Centre of Excellence in European Studies, Global Studies Institute, University of Geneva, Geneva, Switzerland
Publication Date: 2015 ISBN: 978 1 78195 452 2 Extent: 736 pp
The dissipating multilateral trading system and splintering in a number of trading blocs and arrangements has been one of the most important issues in international economics, particularly after the establishment of the World Trade Organisation in 1995 and especially during the Doha Round (2001-13). This book takes on those and new issues such as integration through spatially fragmented production and operation of supply chains. It also reviews various existing and emerging integration arrangements and their achievements. International economic integration deals are here to stay and evolve with variable successes in spite of advantages offered by the multilateral trading system.

More Information
Critical Acclaim
Contributors
Contents
More Information
In this comprehensive second edition of The Economics of International Integration, Miroslav N. Jovanović examines the theory of international economic integration and explores the existing and emerging international integration agreements, their achievements, problems and prospects. One of the most important issues in international economics today concerns the dissipating multilateral trading system and the proliferation of a number of trading blocs and arrangements. This has been particularly the case after the establishment of the World Trade Organization in 1995 and especially during the Doha Round (2001–13).

This book takes on those and other important new issues such as integration through spatially fragmented production, and the operation of supply chains. The author argues that international economic integration deals are here to stay, and evolve with variable successes in spite of advantages offered by the multilateral trading system. Jovanović’s second edition includes up-to-date surveys of economic integration and their agreements, criticism of the eurozone and speculation on the future of integration.

‘I taught one course on economic policy at Queen’s University and met Miroslav Jovanović, who was the outstanding student in my class. I have followed his career ever since… The most distinctive aspect of his treatment continues to be his union of theory and applied material. For him, the major interest always resides in the problems created by the working out of various forms of integration in real situations. He uses theory but no more than is needed to act as a tool for enlightening our understanding of what we see in the world around us… For those who want a comprehensive survey relevant for understanding the issues surrounding economic integration, this is an excellent book.’
– From the Foreword by Richard G. Lipsey


Critical Acclaim
‘The second edition of Miroslav Jovanović’s The Economics of International Integration will be a useful addition to the bookshelf of anybody interested in teaching a course on economic integration. It is especially strong and up-to-date on developments in Europe, both with respect to completing the EU market and to the evolution of the eurozone. The various integration schemes are situated in the 21st century global economy with its rapidly changing technology. The analysis is always accessible to non-specialists and, while Jovanović has his own views, he is careful in presenting various sides of debates.’
– Richard Pomfret, University of Adelaide, Australia

‘A wide ranging, comprehensive but accessible and topical discussion of the many different dimensions of international economic interdependence and the instruments that governments around the world use to cooperate in the pursuit of greater integration of markets. Highly recommended for students seeking a non-technical treatment of the economics of international integration with extensive discussion of the European experience in moving towards economic and monetary union.’
– Bernard Hoekman, European University Institute, Italy

‘Europe, the Americas, Asia and the Pacific, Africa, and the Middle East, within a region as well as across countries, have been integrating not only by FTAs but also by the development of global supply chains. However, we don’t know much about how the integration is really going and what consequences will be brought about by it. This book provides us with theoretical tools and empirical facts to understand it. Policy makers should read this book to implement good policy.’
– Daisuke Hiratsuka, Institute of Developing Economies (IDE), JETRO, Japan

‘A very effective and up-to-date book for a deep understanding of the complex labyrinth of second-best solutions provided by the existing trading system.‘
– Michele Fratianni, Indiana University, US

‘In the second edition of his successful book, Jovanović offers a highly accessible, wide ranging, balanced and humane account of the economics of international integration. This book will be of great value to students, scholars, policy makers, managers and everyone interested in the nature, determinants, impact and future of inter-national integration in today’s semi-globalised economy’
– Christos Pitelis, University of Bath and Queens’ College, University of Cambridge, UK

‘Paradoxically, the age of globalisation since the 1990s sees the dramatic expansion and evolution of the regional trade agreements (RTAs) around the world. The RTAs are quite different in their purpose and extent from one region to another. In addition, new trend is to establish the mega-RTA like the TPP and the TTIP. Those with interests in the RTAs should look at the present and future situation from theoretical and empirical perspectives. The book by Jovanović serves the best for this purpose with new and various examples.’
– Ken-ichi Ando, Shizuoka University, Japan

A Research Agenda for Real Estate