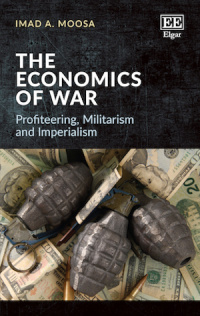 The Economics of War

More Information
Critical Acclaim
Contents
More Information
Bad things occur and persist because of the presence of powerful beneficiaries. In this provocative and illuminating book, Imad Moosa illustrates the economic motivations behind the last 100 years of international conflict, citing the numerous powerful individual and corporate war profiteers that benefit from war.

Inspired and informed by War is a Racket, the 1935 work of General Smedley Butler, the author explores historic and contemporary incidents of war profiteering, identifying individuals and groups that have increased their wealth through the supply of weaponry, mercenaries, provisions and finance in times of war. This book offers a caustic indictment of the military-industrial complex, exploring the privatisation of conflict that has fuelled war across the globe.

Providing a contemporary, in-depth analysis of the economics of war, this book is critical for academics and students of war studies, international relations and military and political history. Policy makers will also benefit from this book’s comprehensive analysis of wartime policy and practice.

Critical Acclaim
‘The Economics of War makes an important contribution to our understanding of the causes of war. By identifying the economic incentives motivating wars of aggression, Imad Moosa pulls back the curtain to reveal the stark realities of a foreign policy grounded in militarism and imperialism.’
– Christopher Coyne, George Mason University, US

‘A passionate, uncompromising analysis of historical events that makes a compelling case that most wars were motivated by the economic gains of the few able to exercise political power that was a catastrophic cost to the many. A well-chronicled proposition that immoral acts of violence were imperialist or profiteering pursuits under the guise of humanitarian and moral actions.’
– John Vaz, Monash University, Australia

‘Moosa looks beyond the explicit aims of war to reveal the economic and financial incentives and dimensions underpinning wars of aggression in our modern society. Not since Smedley Butler (1935) has an author so bravely critiqued the true drivers of modern warfare to reveal an uncomfortable truth: wars are about money, rather than noble causes. The book is an informative and enthralling read for anyone interested in the history and causes of war, the international legalisation of war, the micro- and macro-economic impacts of war, and war profiteering.’
– Kelly Burns, Curtin University, Australia
Contents
Contents: Preface 1. War is a Racket: In Memory of Smedley Butler 2. The Causes of War 3. War versus Peace: The Outcome of a Binary Process 4. Imperialism as an Enterprise 5. Wars of Aggression and False Flags 6. War Profiteering, the Military-Industrial Complex and the Deep State 7. A Taxonomy of War Profiteers 8. Banks as War Profiteers 9. Further Thoughts References Index