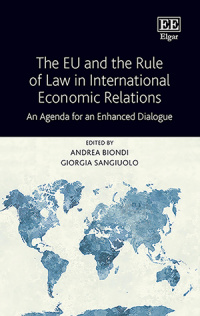 An Agenda for an Enhanced Dialogue

9781839103346 Edward Elgar Publishing
Edited by Andrea Biondi, Professor of EU Law and Director, Centre of European Law, King’s College London and Academic Associate, 39 Essex Chambers and Giorgia Sangiuolo, Legal Adviser, Department for International Trade, Government Legal Department and Fellow of the Centre of European Law, King’s College London, UK
Publication Date: 2021 ISBN: 978 1 83910 334 6 Extent: 368 pp
This timely book explores the complexities of the EU’s international economic relations in the context of its commitment to the rule of law both within the Union and internationally. Bringing together diverse perspectives from both EU and international law scholars and practitioners, the book investigates some of the most controversial and lively issues in the field of EU external relations and the relationship between EU law and international law.

Scholars and practitioners working in EU external relations, constitutional EU law, and public international law will find this book to be essential reading. Its critical approach will also be of great interest to policymakers in Europe and beyond.

Critical Acclaim
‘The performance of the European Union as a promoter and enforcer of the Rule of Law in international politics is so poor it makes me cry. The only chapter of international law in which the EU shows muscle is international economic law. New developments in this area are what the core of the present book is about and it treats them in a singularly dense and complete way, with an emphasis on the legal structures and procedures featuring in the Union’s Common Commercial Policy. What it offers on Achmea, for instance, counts among the best reads about this Pandora’s Box I have come across.’
– Bruno Simma, Judge, Iran-United States Claims Tribunal, and former Judge, International Court of Justice, The Hague
Contributors
Contributors: Andrea Biondi, Sonja Boelaert, Frank J. Büchel, Quentin Declève, Rosana Garciandia, Steffen Hindelang, Francis G. Jacobs, Urszula Jaremba, Adam Łazowski, Elisa Longoni, Federico Ortino, Giancarlo Piscitelli, Fausto Pocar, Giorgia Sangiuolo, Hugo H. Siblesz, Raymundo Tullio Treves, Susanna Villani, Philippa Webb, Simon Weber, Carsten Zatschler, Ewa Źelazna

Foreword x
PART I RULE OF LAW: BETWEEN AUTONOMY AND
JUDICIAL DIALOGUE
1 The EU: Unifying or fragmenting force in international law? 2
Philippa Webb
2 Three years after Achmea: What is said, what is unsaid,
and what could follow 14
Andrea Biondi and Giorgia Sangiuolo
3 Opinion 1/17 of the Court of Justice on the legality,
under EU law, of the investor-to-state dispute settlement
mechanism included in the CETA agreement. A case of
legal pragmatism or the dawn of a new era? 37
Sonja Boelaert
4 Investment tribunals vis-à-vis national courts: Lessons on
judicial dialogue from the EU 69
Urszula Jaremba and Giancarlo Piscitelli
5 The relationship between the Court of Justice of the
European Union and international courts after Opinion 1/17 89
Ewa Żelazna
6 Settling disputes on TSD Chapters of EU FTAs: Recent
trends and future challenges in the light of CJEU Opinion 2/15 107
Susanna Villani

PART II PROMOTING DIALOGUE IN THE EU
EXTERNAL ECONOMIC RELATIONS.
DIALOGUE BY TREATY DRAFTING
7 The price for a seat at the ISDS reform table: CJEU’s
clearance of the EU’s investment protection policy in
Opinion 1/17 and its impact on the EU constitutional order 127
Steffen Hindelang
8 Draft EU-Swiss institutional agreement: Towards a new
institutional paradigm? 154
Adam Łazowski
9 The role of treaty drafting in ensuring the binding nature
and enforcement of international rulings handed down
against States or international institutions: A comparison
of EU and US case-law 180
Quentin Declève
10 The phasing-out of intra-EU BITs and the risk for the rule of law 194
Raymundo Tullio Treves
11 Unleash the liger: The nature of the investment court
system and its impact on enforcement 213
Simon Weber
12 Human rights scrutiny under the EU Generalised Scheme
of Preferences: The Uzbek cotton industry as a case study 238
Rosana Garciandia
13 New tendencies in Free Trade Agreement drafting:
International financial standards in the EU Free Trade
Agreements 257
Elisa Longoni

PART III INTERNATIONAL COURTS AND
TRIBUNALS UPHOLDING THE RULE OF LAW
14 Some remarks on the contribution of UN courts and
tribunals to the rule of law and the unity of international law 277
Fausto Pocar
15 Old stage, new actors: The PCA as a platform for an
evolving rule of law 288
Hugo H. Siblesz
16 WTO dispute settlement: A curse or a bliss in international
trade relations? 300
Federico Ortino
17 Judicial protection in the EEA 311
Frank J. Büchel and Carsten Zatschler