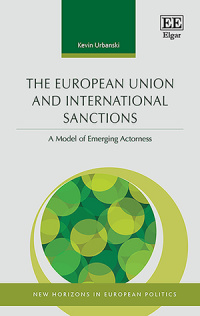 The European Union and International Sanctions

A Model of Emerging Actorness

More Information
Critical Acclaim
Contents
More Information
This enlightening new book unpacks the ascendancy of the European Union as a distinct actor in the field of international sanctions. Offering an innovative model of actorness, Kevin Urbanski establishes a coherent bridge between debates on actorness and mainstream theories of international institutions and European integration.

Inspired by James S. Coleman’s idea of corporate agency, Urbanski addresses the conceptual gap in scholarship by outlining a deductive, integrative and explanatory model of actorness, arguing that actorness constitutes a distinct mode of collective agency that can be modelled along the lines of corporate action. Urbanski’s model of actorness explains the emergence of EU actorness and sheds light on the timing and reasoning behind this for the most commonly used European sanction instruments.

Presenting an original and theoretically grounded approach to the problem of actorness, this book will be of critical use to scholars grappling with this problem, especially those working in the field of EU politics. Scholars of international sanctions and EU law, as well as practitioners working in these fields, will also benefit from Urbanski’s comprehensive overview of EU restrictive measures and his unique approach to actorness.

Critical Acclaim
‘Urbanski´s work makes an important contribution to the study of EU foreign policy by rigouroulsy defining and operationalising the notion of actorness – a concept that had remained surprisingly vague in the literature. In addition, it constitutes one of the most serious and original studies of EU sanctions policy, recognising nuances in EU actorness across different sanction types.’
– Clara Portela, University of Valencia, Spain

‘This book is a path-breaking study of the origins of EU action capability in the field of international sanctions. Urbanski carefully conceptualizes the EU as an actor in its own right and shows that the EU frequently gains foreign policy action capability not from intentional efforts of its member states to join forces and speak with a single voice, but from spill-overs of internal policies.'
– Thomas Gehring, University of Bamberg, Germany
Contents
Contents: Preface 1. Introduction: Actorness and EU Sanctions 2. Towards a Theory of Emerging Actorness 3. Trade Restrictions 4. Arms Embargoes and Dual-Use Sanctions 5. Travel Bans and Asset Freezes 6. Negative Conditionality 7. Conclusion References Index