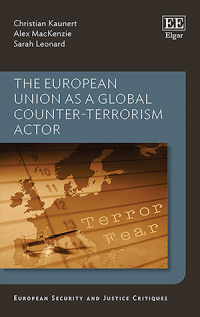 9781782548270 Edward Elgar Publishing
European Security and Justice Critiques series
Christian Kaunert, Dublin City University, Republic of Ireland and University of South Wales, Alex MacKenzie, University of Liverpool and Sarah Leonard, University of the West of England, UK
Publication Date: August 2022 ISBN: 978 1 78254 827 0 Extent: c 200 pp
This is an open access title available under the terms of a CC BY-NC-ND 4.0 License. It is free to read, download and share on Elgaronline.com.

After the death of Osama Bin Laden and the demise of Al Qaeda, the EU is increasingly threatened by new jihadi terrorist groups such as ISIS, as exemplified by recent terror attacks on Paris, Brussels, Nice, Berlin and Manchester. This book investigates the role of the EU in dealing with such groups as part of its counter-terrorism efforts, by outlining the increasing role of the EU as an external counter-terrorism actor.

Analysing one of the most important policy areas of European integration, authors Christian Kaunert, Alex MacKenzie and Sarah Leonard consider the key question of why the EU may have become a global actor in counter-terrorism. The authors then develop a unique theoretical approach in the form of actorness and collective securitization, which analyses the EU’s evolution as a counter-terrorism actor in different case studies, such as counter-terrorism in the transatlantic relationship, North Africa, the Middle East and South Asia. Overall, this book highlights that the EU is, in fact, becoming a counter-terrorism actor of growing importance and with an ever-diversifying number of policy options available.

Addressing topical matters, this book will be a key resource for scholars, researchers and students in fields such as European studies, international relations, political science and governance. It will also attract the attention of practitioners, politicians, non-governmental and civil society organisations.
Critical Acclaim
‘If in doubt whether the European Union is a capable global counter-terrorism actor, read this excellent book written by top-notch experts. Starting from the perspectives of securitization and actorhood, you are guided through the complex history of EU counter-terrorism, demonstrating how terrorism strongly propelled institutionalization, coordination and legislation in the EU internal security theatre. With mounting concerns about violent extremism, disinformation campaigns and hybrid conflicts, this scholarly book offers crucial insights for the future of Europe’s security architecture.’
– Monica den Boer, Netherlands Defence Academy

‘In The European Union as a Global Counter-Terrorism Actor, Christian Kaunert, Alex MacKenzie and Sarah Leonard offer an original theoretical and empirical account of the ways in which the EU has become an actor in global counter-terrorism. Drawing upon the concept of “collective securitization” and the “actorness” framework, this book fills a distinct gap in the scholarship on European security and counter-terrorism. It shows the extent to which the EU’s role in external counter-terrorism has grown in importance and provides a number of case studies revealing numerous policy options available.’
– Oldrich Bures, Metropolitan University Prague, Czech Republic

‘Kaunert, MacKenzie and Leonard have delivered in this volume a thorough and detailed roadmap to the policies, actors and processes that have shaped the EU’s external counter-terror role. In their measured, finely researched analysis, they have meticulously documented the overlooked – almost unexpected – growth of the EU as a significant player in global counter-terrorism. This is a superb resource and a must-read for any person who wishes to understand how the EU is involved in combatting terrorism abroad.’
– Javier Argomaniz, University of St Andrews, UK
Add to Wish List