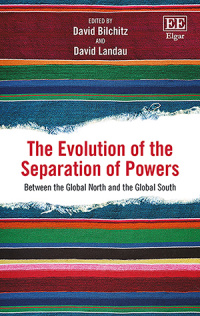 The Evolution of the Separation of Powers

9781785369766 Edward Elgar Publishing
Edited by David Bilchitz, Professor, University of Johannesburg; Director, South African Institute for Advanced Constitutional, Public, Human Rights and International Law (SAIFAC); Secretary-General, International Association of Constitutional Law and David Landau, Mason Ladd Professor and Associate Dean for International Programs, Florida State University, College of Law, US
Publication Date: 2018 ISBN: 978 1 78536 976 6 Extent: 288 pp
To what extent should the doctrine of the separation of powers evolve in light of recent shifts in constitutional design and practice? Constitutions now often include newer forms of rights – such as socioeconomic and environmental rights – and are written with an explicitly transformative purpose. They also often reflect include new independent bodies such as human rights commissions and electoral tribunals whose position and function within the traditional structure is novel. The practice of the separation of powers has also changed, as the executive has tended to gain power and deliberative bodies like legislatures have often been thrown into a state of crisis. The chapters in this edited volume grapple with these shifts and the ways in which the doctrine of the separation of powers might respond to them. It also asks whether the shifts that are taking place are mostly a product of the constitutional systems of the global south, or instead reflect changes that run across most liberal democratic constitutional systems around the world.

More Information
Critical Acclaim
Contributors
Contents
More Information
To what extent should the doctrine of the separation of powers evolve in light of recent shifts in constitutional design and practice? New constitutions often include newer forms of rights – such as socio-economic and environmental rights – and are written with an explicitly transformative purpose. The practice of the separation of powers has also changed, as the executive has tended to gain power and deliberative bodies like legislatures have often been thrown into a state of crisis.

By engaging widespread comparative experiences from Malawi, to Colombia, Mexico to South Africa, Hungary to the United States of America, this examination of the doctrine of the separation of powers takes into account important recent changes in constitutional design and practice, including the widespread inclusion of socio-economic rights, the creation of independent bodies outside the traditional structure, the growth of executive power, and the crisis of legislative legitimacy. It also considers the extent to which this re-framing should be confined to the emerging democracies of the global south or whether it can be applied more widely across all constitutional systems.

Critical Acclaim
‘This volume subjects a central tenet of constitutional theory – separation of powers – to a searching analysis in comparative perspective. The essays offer rigorous analysis and fresh perspectives. The volume’s attention to the constitutions of the global south is an especially welcome and important addition to the comparative constitutional scholarship.’
– Adrienne Stone, The University of Melbourne, Australia

‘The separation of powers is one of the most central and familiar concepts in constitutional law. Yet it is surprisingly under-studied from a comparative perspective: by engaging some of the world’s leading comparative constitutional scholars on the topic, this volume thus provides a highly timely and valuable contribution to the existing constitutional literature. In doing so, it also points to new and exciting possibilities about what re-imagined separation of powers understandings might look like – i.e. how in countries in the global south in particular, recent decades have seen the growth of new institutions and institutional relationships that may well redefine how we ultimately understand the pre-requisites for democracy, the rule of law and basic government accountability.’
– Rosalind Dixon, University of New South Wales, Australia
Contributors
Contributors: D. Bilchitz, D. Bonilla Maldonado, V.C. Jackson, R.E. Kapindu, D. Landau, F. Mohamed, J.M. Serna de la Garza, R. Uitz

1. Introduction: The Evolution of the Separation of Powers in the Global South and Global North
David Landau and David Bilchitz

3. Towards a Defensible Relationship Between the Content of Socio-Economic Rights and the Separation of Powers: Conflation or Separation?
David Bilchitz

4. Courts and the Expansion of Executive Power: Making the Constitution Matter
Renata Uitz

5. Accommodating an Old Constitution to the 21st Century State: Of Law and Politics
Vicki C. Jackson

6. The Conceptual Architecture of the Principle of Separation of Powers
Daniel Bonilla Maldonado

Part II Independent Accountability Institutions and the New Separation of Powers in the Global South
7. The Fourth Branch: Challenges and Opportunities for a Robust and Meaningful Role for South Africa’s State Institutions Supporting Democracy Faraaz Mohamed

8. Separation of Powers and the Accountability Role of NHRIs: The Malawi Human Rights Commission Through the Courts
Redson Edward Kapindu