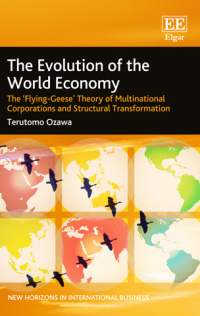 The Evolution of the World Economy

The ‘Flying-Geese’ Theory of Multinational Corporations and Structural Transformation

9781781003305 Edward Elgar Publishing
New Horizons in International Business series
Terutomo Ozawa, Emeritus Professor of Economics, Colorado State University and Research Associate, Center on Japanese Economy and Business, Columbia Business School, US
Publication Date: April 2016 ISBN: 978 1 78100 330 5 Extent: 224 pp
The world economy is near a critical crossroads, as a rising China, the greatest-ever beneficiary of US-led capitalism, ironically dreams big to replace America's supremacy as a new hegemonic power with a non-liberal world order. This third volume of the trilogy on ‘flying-geese' theory reformulation explains how capitalism has changed industrial structures across the world. Using structural development economics and political economy analytics the unfolding changes in the global industrial landscape are examined in depth. Will the flying-geese formation, a formation that has produced the East Asian Miracle and is hoped to spread to Africa, survive?

More Information
Critical Acclaim
Contents
More Information
The world economy is near a critical crossroads, as a rising China, the greatest-ever beneficiary of US-led capitalism, dreams to replace America's supremacy as a new hegemonic power with a non-liberal world order. This third volume of the trilogy on reformulating the ‘flying-geese’ theory explains how capitalism has changed industrial structures across the world. It asks whether the ‘flying-geese’ formation will survive the changes that have produced the East Asian miracle, and – as hoped – spread to Africa.

Terutomo Ozawa’s reformulated 'flying-geese' theory explains structural changes as an innovation-driven, ratcheting-up process of economic growth and shows that market-driven multinational corporations are key players for a successful ‘flying-geese’ formation and structural transformation. The book argues that the ‘ladder’ of economic development must be conceived as a double-helix with inter- and intra-industry rungs, the latter embedding cross-border supply chains and adaptive innovations. A thorough exploration of the structural changes under Pax Britannica and Pax Americana – moving from ‘kicking away the ladder’ from emerging economies to then providing it – demonstrates that this trend engenders multinational corporations that can facilitate structural transformation, particularly in catching-up economies. Ozawa shows that China is now in the critical transitional period that requires more sophisticated institutional, socio-political setups, as well as more advanced knowledge and ethics to move from the lower to the higher rungs.

This enlightening, accessible and timely conclusion to Ozawa’s trilogy will be of great interest to many, particularly those specialising in international business, economics, political science, and international relations. Academics and practitioners alike will find this an invaluable resource.

Critical Acclaim
‘Terutomo Ozawa’s by now established “flying-geese” framework connects the development objectives of home and host countries in international business relationships. This book shifts his analytical attention from the role of Japan to the role of China in international business and cross-border development linkages. In a masterly fashion, Ozawa derives some wonderfully perceptive insights from his cross-country framework that explains the system of relationships between international business growth, East Asian catch up, and the scope for wider global development.’
– John Cantwell, Rutgers, The State University of New Jersey, Newark, US and Editor-in-Chief, Journal of International Business Studies
Contents
Contents: PART I REFORMULATION IN STRUCTURALIST PERSPECTIVE 1. Why Akamatsu's Original Theory needs Reformulation 2. The Classical Origins of Akamatsu's Ideas: A Missing Link to David Hume's 'Flying-manufacturers' Theory 3. The Ladder of Economic Development Revisited– and Elaborated 4. The Dynamics of MNC-impacted Comparative Advantage: Relevance to Ricardo's View on FDI and Samuelson's Scepticism about Globalization PART II HOME-GROWN MULTINATIONALS AT DIFFERENT STAGES OF GROWTH 5. The Rise of Multinationals from Emerging Markets: East Asian Experiences 6. The Next Great Industrial Transmigration: Relocating China's Factories to Sub-Saharan Africa, Flying-geese Style? PART III FLYING-GEESE FORMATION AT A NEW CROSSROADS 7. Prospects for the Future of FG-style Growth Index