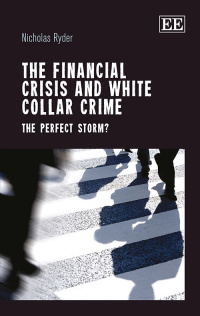 9781781000991 Edward Elgar Publishing
Nicholas Ryder, Professor in Financial Crime, Department of Law, University of the West of England, UK
Publication Date: 2014 ISBN: 978 1 78100 099 1 Extent: 352 pp
Concentrating on the relationship between the 2007 financial crisis and white-collar crime in both the United States of America and the United Kingdom this unique book asserts that such activity was an important variable that contributed towards the crisis. It also reveals a number of similarities and differences in the approach towards white-collar crime emanating from the financial crisis.

More Information
Critical Acclaim
Contents
More Information
Concentrating on the relationship between the 2007 financial crisis and white-collar crime in both the United States of America and the United Kingdom this unique book asserts that such activity was an important variable that contributed towards the crisis. It also reveals a number of similarities and differences in the approach towards white-collar crime emanating from the financial crisis.

Offering an important analysis of the factors which contributed to the global financial crisis and the role played by economic crime, the author provides an insightful critique of the legislative, regulatory and enforcement responses on both sides of the Atlantic. Specific examples include mortgage fraud, predatory lending, Ponzi fraud schemes, market misconduct and the manipulation of LIBOR. Nicholas Ryder’s conclusions are powerful, and those responsible for policing the financial markets should take careful note of the recommendations he puts forward.

This timely book will be of great use to both teachers and students of financial crime relevant modules. It will also appeal to policy-makers in government departments, law enforcement agencies and financial regulatory agencies, as well as professionals within the financial services sector, law and accountancy.

‘The Financial Crisis and White Collar Crime: The Perfect Storm? will be of value to those interested in white collar crime as well as anyone seeking to understand the underlying causes of the crisis and whether or not circumstances have changed to that similar events will not occur in the future.’
– Banking & Finance Law Review

‘This mighty book by Nicholas Ryder is a tome of a monograph, with its 334 pages of which over 100 pages consist of its extensive bibliography, evidence of the huge impact that the financial crisis has had, warranting this plethora of news, official reports, laws, case law, new government policies, new regulatory agencies, television documentaries in many countries...Nicholas Ryder’s book, The Financial Crisis and White Collar Crime, is pretty exhaustive in its description of the financial crisis and deserves a place among the reference books relating to the global financial crisis. I heartily recommend it.’
– Sally Ramage, The Criminal Lawyer

‘Professor Nicholas Ryder in The Financial Crisis and White Collar Crime: The Perfect Storm? not only provides a detailed and comprehensive chronicle of the “dark side” of the near collapse of the western financial system, but in doing so raises a number of exceedingly important issues as to the systems ability to recognise the risks presented by serious crime and its ability to address them. The extent to which fraud and abuse exacerbated the crisis is and will remain a matter for debate. What this book does, often referring to contrasting US experience, is to illustrate the serious weaknesses that existed then and perhaps remain, in the criminal justice systems’ ability to bring those who commit fraud and other abuses to book. Professor Ryder has made a significant contribution not only to our understanding of what went wrong, but also in pointing to what should be done in the future.’
– Professor Barry Rider, Jesus College, Cambridge

‘Nic Ryder has produced an extremely readable and carefully researched monograph. It traces a thorough and intriguing timeline through the financial crisis, incrementally building the evidence to support the link to white collar crime. Each chapter is well argued, comprehensively leading the reader towards his compelling conclusion. It promises to find its way onto the reading lists for university finance, law and criminology courses alike”
– Jackie Harvey, Newcastle Business School, Northumbria University

‘Scholarly analysis of the principal causes of the global economic crash of 2008 has largely ignored any investigation of a part played by white-collar crime in precipitating the collapse. Ryder is one of the few who is not content to let the blame lie with sub-prime mortgages and the inherent risks of the markets. He enquires into the relationship between the latter-day economic chaos and crime, particularly mortgage fraud and the examination he offers is compelling. Through a distillation of massive amounts of materials drawn from two critical global financial centers, the United States and the United Kingdom, Ryder concludes, reliant on tangible empirical examples, that the prevalence of white-collar fraud was an important constituent contributor to the financial crisis.’
– Michelle Gallant Ph.D, Faculty of Law, University of Manitoba

‘In this well-researched and thoughtful new book, Nic Ryder makes a strong case for thinking more about the role of white collar crime in causing the financial crisis, and why prosecution has not been a bigger part (particularly in the UK) of the authorities’ responses to it.’
– Peter Cartwright, School of Law, University of Nottingham, UK

‘As Professor in Financial Crime in the Department of Law at the University of the West of England, Ryder has written what may well become the definitive work on the subject of white collar crime. . . From law, to finance to criminology, anyone involved in these areas should acquire a copy of this book, especially considering that the research is prodigious.’
– Phillip Taylor MBE and Elizabeth Taylor, The Barrister Magazine

‘Professor Nicholas Ryder of the University of the West of England has written this impressive and very readable monograph… The book is highly recommendable reading for law makers, regulators and practitioners in the field of finance.’
– Journal of International Banking Law and Regulation