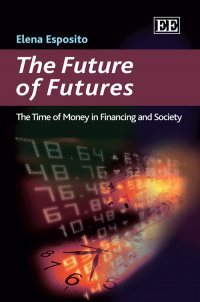 The Future of Futures

The Time of Money in Financing and Society

9781849801522 Edward Elgar Publishing
Elena Esposito, Bielefeld University, Italy
Publication Date: 2011 ISBN: 978 1 84980 152 2 Extent: 232 pp
This book reconstructs the dynamics of economics, beginning explicitly with the role and the relevance of time: money uses the future in order to generate present wealth. Financial markets sell and buy risk, thereby binding the future. Elena Esposito explains that complex risk management techniques of structured finance produce new and uncontrolled risks because they use a simplified idea of the future, failing to account for how the future reacts to attempts at controlling it. During the recent financial crisis, the future had already been used (through securitizations, derivatives and other tools) to the extent that we had many futures, but no open future available.

More Information
Critical Acclaim
Contents
More Information
This book reconstructs the dynamics of economics, beginning explicitly with the role and the relevance of time: money uses the future in order to generate present wealth. Financial markets sell and buy risk, thereby binding the future. Elena Esposito explains that complex risk management techniques of structured finance produce new and uncontrolled risks because they use a simplified idea of the future, failing to account for how the future reacts to attempts at controlling it. During the recent financial crisis, the future had already been used (through securitizations, derivatives and other tools) to the extent that we had many futures, but no open future available.
Critical Acclaim
‘The Future of Futures is an innovative and timely book, an excellent and accessible introduction. Readers would be well advised to put their intellectual certainties at risk by engaging with it, observe their reactions to its insights, paradoxes and analyses, learn from its challenging, paradigm-busting arguments, and contribute thereby to the development of science and the critique of economics.’
– SirReadaLot.org

‘Within the cacophony of voices trying to explain the recent financial crisis, Elena Esposito’s voice sounds clear and deep. Steering away from simplistic condemnations and equally simplistic prescriptions for betterment, she connects the very invention of derivatives to that eternal human hope – of controlling the future. While the task is impossible, the attempts never stop, and the very process of attempting it brings some consolation. And while derivatives can be seen, claim sociologists of finance, as performative, that is shaping the future they promise to control, even this is far from certain. Esposito’s fascinating and beautiful work is an important contribution to the sociology of finance, a subdiscipline of sociology that took on itself an extremely important task of explaining how the finance markets really work.’
– Barbara Czarniawska, University of Gothenburg, Sweden

‘This is a brilliant and timely book that shows how financing is centrally implicated in the very unpredictability and uncertainty it purports to master. With the incisiveness characteristic of her style and writing, Esposito reads economics in innovative ways that disclose the hidden premises by which financial instruments trade and consume the prospects of the future.’
– Jannis Kallinikos, London School of Economics, UK

‘Elena Esposito’s analysis of financial markets and of their recent decline is radically different from the analyses which can be found in economic journals or books. Financial operations are reduced to their basic dimensions: time and money. Under this perspective, what is sold on financial markets is the possibility for the creation of commitments in the course of time, the possibility for the combination of these commitments with one another, and the identification of chances for the achievement of profit opportunities through the creation of specific combinations. The author argues that the recent crisis of the financial system was caused by oversimplified visions of the future and of risk leading to the consequence that options were not available in the present because all possibilities had been used up by the future. This oversimplified vision of the future imploded, and trust with it. The state tried to reconstruct options for the future in order to open up new possibilities and chances for learning. The author does not deliver recipes on how to prevent severe crises of the financial system in the future. Yet, her concept facilitates understanding of how financial futures are opened up or closed and thus provides insights into basic principles on whose basis future opportunities can be kept open and trust can be maintained. Innovative reforms of the financial system can only develop on the basis of unconventional analyses. Elena Esposito’s book contains an analysis of this kind.’
– Alfred Kieser, Mannheim University, Germany

‘Elena Esposito’s book is a fundamental analysis of time in economics. With economic rigour underpinned by sociological reasoning, she explains the futures market more clearly than is possible with economic analysis alone. Economic concepts are considered in terms of time – actors deal in the present with future risks by transferring these risks to the present situation. As a result, we get more options and more risks at the same time: at present. No equilibrium will balance these trades because of the asymmetry of time: our actual decisions deal with our imagination of the future, that is, with the future of the present, but the results will be realized in the presence of the future – different modalities of time. The book is a sound reflection on modelling time in economic theory, a “must” for economists.’
– Birger P. Priddat, Witten/Herdecke University, Germany

‘The Future of Futures is an original and intellectually provocative book which forces the reader to think. Esposito’s essay fulfils two rather different functions. On the one hand, it brings new and persuasive arguments to bear against the erroneous thesis that the present financial crisis is merely due to human mistakes and to some specific government failures. On the other hand, the book suggests that only by reconsidering the role of time in the economy is it possible to make full sense of the crisis and to re-orient in a desired direction the future movements of money. It is a well-known fact that traditional economics has always adhered to a spatial conception of time, according to which time, like space, is perfectly reversible. Whence its inability both to understand how economies develop and to prescribe adequate policies. The author’s proposal is to move steps ahead in the direction of an analysis of an economy in time, where both historical time and time as duration can find a place. Esposito’s well-written, jargon-free book will capture the attention of anyone seriously interested in the future of our market systems.’
– Stefano Zamagni, University of Bologna and Johns Hopkins University, Bologna Center, Italy
Contents
Contents: Foreword by Bob Jessop Introduction Part I: The Time of Money 1. Time in Economics 2. Time Binding 3. Economy is Time: Needs and Scarcity 4. Money 5. The Market 6. Financial Markets Part II: The Time of Finance 7. Paper Finance and the Relationship to the World 8. Derivatives 9. The Production of the Future 10. Trading Uncertainty Part III: The Time of the Crisis 11. The Crisis – Presuppositions 12. The Crisis – Evolution 13. The Crisis – Regulation References Index
Add to Wish List
eBook for individuals
978 1 84980 911 5
From $40.00
Click here for options
eBook for library purchase
978 1 84980 911 5
View sample chapter and check access on:

Research Handbook on the Sociology of Organizations