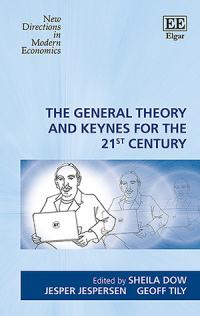 The General Theory and Keynes for the 21st Century

9781786439871 Edward Elgar Publishing
New Directions in Modern Economics series
Edited by Sheila Dow, Emeritus Professor of Economics, University of Stirling, UK, Jesper Jespersen, Professor of Economics, Roskilde University and Aalborg University, Denmark and Geoff Tily, Senior Economist, TUC, UK
Publication Date: 2018 ISBN: 978 1 78643 987 1 Extent: 232 pp
This book is devoted to the lasting impact of The General Theory (and Keynes’s thought) on macroeconomic theory, methodology and its relevance for understanding the post-crisis challenges of the 21st Century. A number of contributions take their departure from Keynes's presentation during the 1930's of his new macroeconomic understanding and its policy implications. Other chapters take a more pluralistic view of Keynes's ideas and their importance for contemporary debates. Further, it is demonstrated that many textbooks often misrepresent The General Theory and therefore cannot be a reliable guide to 21st Century economic policy.

More Information
Critical Acclaim
Contributors
Contents
More Information
This book is devoted to examining the lasting impact of The General Theory and Keynes’s thought on macroeconomic theory, methodology and its relevance for understanding the financial and economic challenges of the 21st Century. A number of contributions take their departure from Keynes’s presentation during the 1930s of his new macroeconomic understanding and its policy implications. The book also discusses pluralistic views of Keynes’s ideas and their importance for contemporary debates.

The General Theory and Keynes for the 21st Century develops the analysis of money and banking, and the intertwined relationship between financial and real-world activities throughout. It demonstrates how vital Keynes’s work is to understanding the failure of the globalised financial system as well as pointing to an alternative way forward.

The broad scope and richness of the contributions are reminders of how most books severely misrepresent The General Theory and therefore fail to act as a guide to 21st Century policy. As such, this book is a necessary tool for scholars, researchers and advanced students of economics, as well as policy makers who wish to create a more just society in the face of the current deregulated global market economy.

Critical Acclaim
‘This volume makes a strong case that—as seen from several angles—The General Theory and Keynes’s thinking are most certainly relevant for the twenty-first century.’
– Roy H. Grieve, Journal of the History of Economic Thought

‘A fresh and deep dive into a host of outstanding issues in the canon of Keynes studies, from Indian Finance to IS-LM and beyond.’
– James K. Galbraith, University of Texas at Austin, US

‘The economic ruptures that began in 2007 have revealed how profoundly mistaken were the sustained efforts to remove Keynes’s General Theory from its central place in macroeconomic theory and policy. Drawing on the celebrated work of Victoria Chick, our ablest interpreter of that enigmatic volume, the essays gathered here build new bridges from Keynes’s insights to our current policy dilemmas.’
– Gary Dymski, University of Leeds, UK

1. On the relevance of The General Theory at 80: economic change and economic theory
Victoria Chick

4. The attacks on The General Theory: how Keynes’s theory was lost
G.C. Harcourt, Peter Kriesler and J.W. Nevile

5. What future for ‘Macroeconomics after Keynes’? A road map to restore the generality of The General Theory
Teodoro Dario Togati

6. Expectations, equilibrium and time in The General Theory
Anna M. Carabelli and Mario A. Cedrini

8. On some principles to fix the quantity of bank money
Tim Congdon

11. The ‘Gibson Paradox’, The General Theory and beyond
Gerhard Michael Ambrosi

13. Keynes and Marx: some points of contact
Andy Denis

14. No invitation to ‘Alles Walzer!’: Schumpeter on The General Theory
Heinz D. Kurz