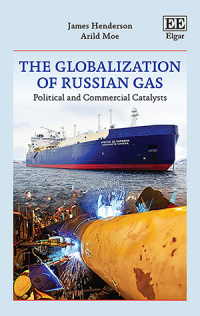 The Globalization of Russian Gas

9781789900378 Edward Elgar Publishing
James Henderson, Director, Natural Gas Research Programme, Oxford Institute for Energy Studies (OIES), UK, Visiting Professor, Masaryk University, Brno, Czech Republic and Arild Moe, Research Professor, Fridtjof Nansen Institute (FNI), Norway
Publication Date: 2019 ISBN: 978 1 78990 037 8 Extent: 200 pp
Since the collapse of the Soviet Union, Gazprom has dominated the Russian gas industry. However, the markets in which it operates have changed dramatically, with the company increasingly being challenged at home and abroad. At this critical moment, this insightful book analyses the involvement of the Russian gas industry in the changing international gas market and the dramatic implications for Russia’s role as a global supplier of gas in the future.

More Information
Critical Acclaim
Contents
More Information
Since the collapse of the Soviet Union, Gazprom has dominated the Russian gas industry. However, the markets in which it operates have changed dramatically, with the company increasingly being challenged at home and abroad. At this critical moment, this insightful book analyses the involvement of the Russian gas industry in the changing international gas market and the dramatic implications for Russia’s role as a global supplier of gas in the future.

James Henderson and Arild Moe explore the link between changes in Russia’s domestic market, where new players have recently emerged, and the development of Russia’s gas export business. In particular, they assess the growing importance of LNG exports and the role of Novatek in developing this new business area for Russia. They also review changes in European gas trade and the development of new EU regulations, analysing the ambiguities in Europe’s position on gas exports from Russia and showing why efforts to limit expansion of Russian gas exports have been unsuccessful.

Timely and comprehensive, this book is critical reading for academics and researchers interested in the development of the global gas market. Policymakers and economists, particularly Russian specialists, will benefit from this book’s key insights into the economic and political consequences of Russia’s changing role in the global gas market.

Critical Acclaim
‘The Globalization of Russian Gas provides a valuable new perspective on an important issue; while Henderson and Moe have set out to write a work focused mainly on the domestic side or Russian gas, they have actually delivered a study with important international implications.’
– Randall Newnham, European Review of International Studies

‘The Globalization of Russian Gas offers a fascinating account of the strategic and commercial role of gas in Russia’s relations with the EU, China and the US. The book is a must-read for anyone interested in Russian energy, and energy markets more generally.’
– Anatole Boute, Europe-Asia Studies

‘Rare are those academic books that I truly enjoy or that even read in bed. This is one of them. Perhaps it has something to do with my interest in natural gas markets with its legal, political and commercial twists, but it is certainly also connected to the fact that this is a great book. Not only does it provide the reader with up-to-date and in-depth information concerning the globalization of Russian gas, it is also an extremely well written book. It is one of the few academic publications that is easy to read and something that can, and should, be read from page one to the very last page.’
– Kim Talus, Oil, Gas & Energy Law Intelligence

This is an outstanding and path-breaking book, by two of the best authorities on the subject, backed by two of the leading research institutes on energy policy, the Oxford Institute for Energy Studies, and the Nansen Institute in Oslo. The book comes at a key moment in the history of the Russian gas sector, when the traditional division of duties between the industry and state, which had remained largely unchanged since Soviet times, has now become increasingly unstable, and may lead to profound changes ahead, with far-reaching implications for Russian gas strategy, at a time of revolutionary changes in the world gas industry.’
– The Russian Review

‘The topic of Russian gas has become deeply controversial, evoking passionate responses. James Henderson and Arild Moe do not fall into the trap of over-polarization, and provide a great analysis of the current situation.’
– Aurélie Bros, Harvard University, US

‘James Henderson and Arild Moe bring years of research on Russian gas to this examination of the interplay between domestic developments and global forces. They explain changing dynamics in the Russian market and the growing competition between Gazprom, Rosneft and Novatek. Having failed to take US shale gas and the EU’s liberalisation project seriously, they detail how Gazprom has gained from market competition. However, it is Novatek that has stolen a march in leading Russia’s drive to become a serious player in the global LNG market. This book is essential ready for everyone interested in the global gas market and the future of gas in Russia.’
– Michael Bradshaw, University of Warwick, UK

‘For energy and geopolitical practitioners, this valuable book provides an indispensable analysis of the importance of viewing Russian gas through European, Asian and global lenses, as the country becomes an increasingly important player not just in relation to pipeline gas, but also in the global LNG market.’
– Jonathan Stern, The Oxford Institute for Energy Studies, UK
Contents
Contents 1. Introduction 2. Domestic gas politics 3. SPIMEX and the traded gas market in Russia: A signpost for the future? 4. Gazprom and the Evolution of the European Gas Market 5. The increased politicization of Russian gas supplies 6. The Promise of Asian Markets 7. LNG - globalisation in another manner 8. Conclusions Index