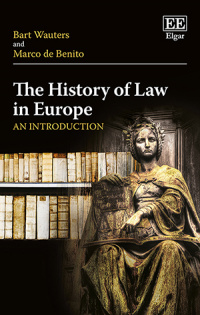 9781786430779 Edward Elgar Publishing
Bart Wauters and Marco de Benito, Professors of Law, IE University, Spain
Publication Date: 2018 ISBN: 978 1 78643 077 9 Extent: 200 pp
Comprehensive and accessible, this book offers a concise synthesis of the evolution of the law in Western Europe, from ancient Rome to the beginning of the twentieth century. It situates law in the wider framework of Europe’s political, economic, social and cultural developments.