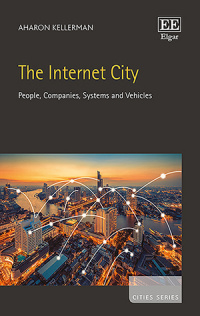 9781788973588 Edward Elgar Publishing
Cities series
Aharon Kellerman, University of Haifa, Israel
Publication Date: 2019 ISBN: 978 1 78897 358 8 Extent: 224 pp
Exploring the history of the Internet, from pre-conception, to the possibilities of an Internet-based future, The Internet City presents ways in which the Internet and urban life intersect. The book interprets how the contemporary city is becoming fully based on Internet technologies in all of its major dimensions: the daily activities of urbanites and urban companies, the operations of urban systems, and the functioning of the upcoming driverless vehicles.

The book interprets how the contemporary city is becoming fully based on Internet technologies in all of its major dimensions: the daily activities of urbanites and urban companies, the operations of urban systems, and the functioning of upcoming driverless vehicles. With particular focus on the ways in which people routinely consume urban services via the Internet, Aharon Kellerman examines how they are simultaneously present in physical and digital spaces.

Urban geographers and urban planners will benefit from the detailed information on how the cityscape will be altered in the near future by the introduction of Internet-based autonomous vehicles. City policymakers will also find this a useful tool to explore how and why policies may need to be updated in accordance with the rising importance of the Internet in the urban sphere.

Critical Acclaim
‘For more than 30 years Aharon Kellerman has chronicled the spatial implications of evolving communications and internet technologies culminating in his current volume The Internet City. . . The book is accessible to a wide audience and would find a place in undergraduate and graduate courses on information geography or urban planning, as well as be useful for urban planners, city managers and policy makers.’
– Mark Wilson, Urban Analytics and City Science

‘As the Internet revolution continues to reverberate through the global economy and daily life, urban life has become progressively more constituted around digital transactions. Kellerman has long been one of the most astute observers of this transformation. This volume not only covers the basics of how cyberspace has become woven into the contemporary world, such as cell phones and digital divides, it also breaks new ground by addressing topics that have received scant attention, such as autonomous vehicles. It offers a fecund series of insights into how people, firms, and places have been restructured by the ever-growing use of digital technologies. This volume will be useful to students and faculty alike, and of interest to anyone interested in how cyberspace and the analogue world have become shot through with each other.’
– Barney Warf, University of Kansas, US

‘Computer networks and autonomous technologies continue to rapidly redefine the geography of the city. Kellerman has spent a lifetime reflecting on what this might mean and his recent book presents one of the most insightful pictures of this future to date. Essential reading for all those interested in how our future cities will be organized.’
– Michael Batty, University College London, UK
Contents
Contents: PART I URBAN CONNECTIVITY AND INFORMATIONAL ACTIVITIES 1. Introduction 2. Pre-Internet urban connectivity and informational activities 3. The Internet PART II URBAN INTERNET APPLICATIONS 4. The Internet for Individual users 5. The dual-space society 6. The Internet and companies 7. The Internet for urban systems 8. Autonomous vehicles (AVs) and the Internet PART III IMPLICATIONS OF URBAN INTERNET APPLICATIONS 9. Urban perspectives for the Internet-based city 10. Conclusion Index