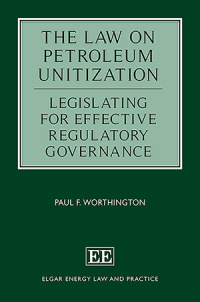 The Law on Petroleum Unitization

9781789907100 Edward Elgar Publishing
Elgar Energy Law and Practice series
The late Paul F. Worthington, former Consultant in Petroleum Unitization and Visiting Professor, Imperial College London, UK
Publication Date: 2020 ISBN: 978 1 78990 710 0 Extent: 320 pp
This comprehensive book addresses both the principles and the practicalities of petroleum unitization. Paul F. Worthington draws on both his extensive experience of the global petroleum industry and his insights into petroleum unitization in some 90 jurisdictions worldwide to map out the evolution of and rationale for unitization in legislation and to provide much-needed guidance on the formulation of a legislative framework for effective regulatory governance of the unitization process.

More Information
Critical Acclaim
Contents
More Information
This comprehensive book addresses both the principles and the practicalities of petroleum unitization by mapping out the evolution of and rationale for unitization in legislation and by providing much-needed guidance on the formulation of a legislative framework for effective regulatory governance of the unitization process.

Drawing on his own extensive experience of the global petroleum industry and his insights into petroleum unitization in some 90 jurisdictions worldwide, Paul F. Worthington discusses the key elements of legislation for incorporation into petroleum unitization statutes, implementing regulations and production contracts. He provides a basis for legal drafting at all levels of this tripartite legislative framework as well as guidelines for compliance with good international petroleum practice.

The Law on Petroleum Unitization: Legislating for Effective Regulatory Governance will prove essential reading for legal practitioners working in government ministries with a responsibility for energy affairs as well as for energy regulators, energy companies and those legal firms who provide unitization advice. Petroleum consultancies, negotiators and energy policy advisers within professional bodies and academia will also benefit from this book’s thorough and incisive treatment of the subject matter.

Critical Acclaim
‘Paul F. Worthington‘s extensive research has produced this important work about unitization. The book‘s greatest virtue is in pulling together the unitization rules of 90 countries, analyzing them in a methodological manner and proposing recommendations to improve this complex and relevant process. Worthington‘s work presents itself as an important reference for scholars, policy analysts, oil and gas lawyers, and especially regulators who are charged with drafting unitization rules.’
– Luciana Braga, Université Grenoble Alpes, France

‘This book offers an insightful analysis of the diversity of tripartite legal frameworks (statutes, regulations, and contract provisions) used today to promote the unitization of petroleum reservoirs around the world. Written by a geoscientist with experience in many unitization negotiations, Paul F. Worthington’s research finds where gaps in the legal framework, mismatched terms among the three framework levels, and overly prescriptive provisions at some levels can hinder the maximum recovery of petroleum today. He concludes by offering a useful template of key factors that ideally should be found in a country’s tripartite legal regime for unitization.’
– Jacqueline L. Weaver, University of Houston Law Center, US

‘A meticulously researched and well written volume that considers the law relating to unitization agreements in both developing and developed jurisdictions. Providing both a historical perspective of the concept of unitization as well as a consideration of contemporary unitization agreements, this book is an essential tool for anyone who works in the area of petroleum contracts and initiation. An invaluable read!’
– Tina Soliman Hunter, Macquarie University, Australia

‘Paul F. Worthington’s The Law on Petroleum Unitization is a must-have for those focused on oil and gas unitization. The book’s publication is propitiously timed to provide the foundation for the 2020 AIPN Model Form Unitization and Unit Operating Agreement. Paul comprehensively surveys legislation, regulation and host government contracts that support oil and gas unitization in 90 producing jurisdictions. He has a gift for being able to explain complex concepts by reference to history, custom and practice, and simple logic. The book also offers views on how countries could improve their unitization legislation. Paul’s style is engaging and provocative. While the reader may not agree with everything the author has to say, no one has offered as much rich insight into the unitization process.’
– Andrew B. Derman, Thompson & Knight LLP, US and co-chair of the 2006 and the 2020 AIPN Unitization and Unit Operating Agreement drafting committee
Contents
Contents: Preface 1. Introduction 2. Evolution of legislation relating to shared fluid resources 3. Unitization 4. Current status of unitization legislation 5. Collation of pertinent legislation 6. Analysis of selected unitization legislations 7. Detailed case histories 8. Recommendations for improved legislation for unitization 9. Implementation of recommendations Bibliography Index