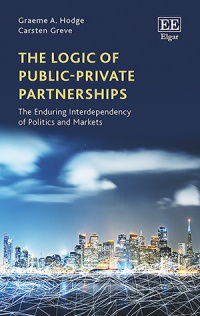 The Logic of Public–Private Partnerships

The Enduring Interdependency of Politics and Markets

9781784716684 Edward Elgar Publishing
Graeme A. Hodge, Professor, Adjunct Professor, Monash University, Australia and Carsten Greve, Professor, Department of Organization, Copenhagen Business School, Denmark
Publication Date: 2019 ISBN: 978 1 78471 668 4 Extent: 304 pp
This book examines Public–Private Partnerships (PPP), and tracks the movement from early technical optimism to the reality of PPP as a phenomenon in the political economy. Today's economic turbulence sees many PPP assumptions changed: what contracts can achieve, who bears the real risks, where governments get advice and who invests. As the gap between infrastructure needs and available financing widens, governments and businesses both must seek new ways to make contemporary PPP approaches work.

More Information
Critical Acclaim
Contents
More Information
Public–Private Partnerships (PPPs) have excited the political world over the past few decades. Few books, however, have viewed them as both a phenomenon of politics as well as a technical matter aiming to better deliver public infrastructure. Through fiercely independent scholarship, this book investigates the various logics of PPPs. In doing so, it challenges those involved in delivering public infrastructure to think more about power, language and politics in decision-making.

The Logic of Public–Private Partnerships takes a cross-disciplinary perspective on PPPs. It notes their global popularity, and considers the varying definitions used and policy positions taken by different governments. It discusses the contemporary, international evidence supporting and opposing the formation of these partnerships, with reference to efficiency, value-for-money and governance. The simultaneous growth of PPPs in some countries is observed along with their demise in others. The book also articulates the solid reasons for which governments might adopt PPPs, before pointing to continuing research priorities.