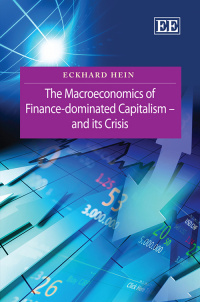 9781781005545 Edward Elgar Publishing
Eckhard Hein, The Institute for International Political Economy (IPE), Berlin School of Economics and Law, Germany
Publication Date: 2012 ISBN: 978 1 78100 554 5 Extent: 232 pp
In this timely and thought-provoking book, Eckhard Hein illustrates that the Great Recession, which hit the world economy in 2008/09, is rooted in the contradictions of finance-dominated capitalism. The author provides an in-depth exploration of the macroeconomics of finance-dominated capitalism, its problems and its crisis, and presents economic policy lessons and alternatives.