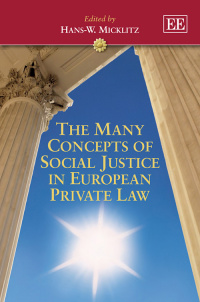 The Many Concepts of Social Justice in European Private Law

The first set of articles is devoted to the relationship between corrective, commutative, procedural and social justice, more particularly the role and function of commutative justice in contrast to social justice. The second section brings together scholars who discuss the relationship between constitutional order, the values enshrined in the constitutional order and the impact of constitutional values on private law relations. The third section focuses on the impact of socio-economic developments within the EU and within selected Member States on the proprietary order of the EU, on the role and function of the emerging welfare state and the judiciary, as well as on nation state specific patterns of social justice. The final section tests the hypothesis to what extent patterns of social justice are context related and differ in-between labour, consumer and competition law.

‘Does European regulatory private law offer a genuine model of justice for society? Beyond its initial libertarian focus on economic integration through the market citizen, might it now serve the social inclusion of the vulnerable? In the wake of Hans Micklitz’s inspired and relentless pursuit of meaning within the ongoing constitutionalization of private law relationships, this rich collection explores the implications of new, specifically European, forms of access rights, which ensure (horizontally and vertically) enforceable and non-discriminatory opportunity for market participation.’
– Horatia Muir Watt, Sciences Po Law School, France

3. Can We Make Sense of Commutative Justice? A Comment on Professor Wojciech Sadurski
Christine Chwaszcza

7. The Constitutionalization of European Private Law as a Path to Social Justice?
Hugh Collins

10. Social Justice in the Welfare State from the Perspective of the Comparative History of Institutions
Cornelius Torp

13. The Europeanization of Social Justice and the Judiciary: How Will Judges React in the EU Member States?
Arthur Dyevre

Consumption
15. The Transformation of Contractual Justice – A Historical and Comparative Account of the Impact of Consumption
Hannes Rösler

Competition
18. Towards a European Model of Economic Justice: The Role of Competition Law
K.J. Cseres