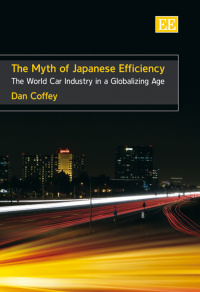 The Myth of Japanese Efficiency

The World Car Industry in a Globalizing Age

The book argues that the ‘lean and flexible’ production model popularly associated with Toyota MC is a myth, but one which sheds light on cultural responses to the attendant stresses of globalization. To illustrate this, Dan Coffey provides individual studies of process flexibility, labour productivity and the re-organization of work in the global car industry.

The book argues that the ‘lean and flexible’ production model popularly associated with Toyota MC is a myth, but one which sheds light on cultural responses to the attendant stresses of globalization. To illustrate this, Dan Coffey provides individual studies of process flexibility, labour productivity and the re-organization of work in the global car industry. Wider evaluations of Japanese impacts on the global economy and a resurgent Western capitalism are then made, progressing the case for a fundamental re-assessment of the narratives informing popular accounts of Japan’s manufacturing success. Beginning with the fictionalization of history and propagation of empirical counterfactuals and finishing with observations on the wider impact of the ‘lean and flexible’ approach, the bold and controversial conclusion reacheld by the author is that what is at stake is our understanding of the form and meaning of ‘production fantasy’.

The Myth of Japanese Efficiency casts a familiar debate in an unfamiliar light. It will strongly appeal to management and business strategy academics, political economists and industrial sociologists interested in the debate on Fordist versus ‘post-Fordist’ production methods/‘lean and flexible’ manufacture and Japanese post-war success in the world market for manufactured goods. Human resource management specialists interested in best production practice will also find much to interest them within this book.
Critical Acclaim
‘. . . if more researchers read this excellent and critical book, we can at least make some headway. The Myth of Japanese Efficiency deserves a wide readership.’
– Paul Stewart, British Journal of Industrial Relations

‘There are not many books that present a formidable challenge to the received wisdom and accepted orthodoxy on a subject. This is one such book and it rises to the challenge with verve, dynamism and a carefully considered array of arguments. . . This is a book well worth reading.’
– Tom Donnelly, Asia Pacific Journal of Economics and Business

‘Coffey’s insightful book promises to make a critical contribution to the literature on the automobile industry. The book lucidly brings together original research, literatures in the economics and sociology of production, and innovative analysis. Coffey has written a book of exceedingly high calibre.’
– Sarah S. Lochlann Jain, Stanford University, US

‘This is a book which deserves to be on the library shelves of every university where sociology is taught. Written by an economist, it comprehensively demolishes the idea of post-Fordism as a new production method centred on flexibility, customization and niche markets. Lean and flexible production in this new era, as opposed to the dull uniformity of the Fordist era, is a fiction; an invention centred on one Japanese car company in particular. Hence the title: The Myth of Japanese Efficiency.’
– Work, Employment and Society

‘The last thirty-five years has seen the emergence of the doctrine that the Japanese motor industry was super-efficient leading to unmatchable average unit costs of production. At the same time the 1990s saw most Japanese car and truck companies hitting stormy waters and most falling under the control of foreign vehicle companies. This fine book explains this paradox and confirms the view of some that the Japanese vehicle firms were not as special as they were made out to be. For those wishing to separate the myth and reality of the Japanese car and truck industry this book is a “must read”. There is no longer a “Japanese” threat, but there may be a Toyota one. Read this book and see why.’
– Garel Rhys OBE, Cardiff University, UK

‘An original and provocative thesis which casts the “lean” and “flexible” in an entirely new light – a challenging study of myth making in a globalizing world.’
– Ulrich Juergens, Social Science Research Centre Berlin, Germany

‘This is an important book about a big subject: Dan Coffey makes the case for this development of a “production fantasy” around the Japan car industry. Dan is an unusual economist: one who takes production seriously, actually seeks to observe what goes on, and understand it. He is ingenious and his empirical work is first rate. An original contribution of great significance.’
– Keith Cowling, Warwick University, UK
Contents
Contents: 1. Introducing the Myth of Japanese Efficiency 2. Wide Selection: A Myth Encountered 3. Production Malapropisms: The BMW–Rover Group Controversy 4. Lean Production: The Dog That Did Not Bark 5. Back to the Future: The Reorganization of Work at Toyota 6. Rivalrous Asymmetries and the Japanese Myth 7. Rethinking Lean Thinking: Substance and Counterfeit 8. The Totalizing Myth: Japanese Efficiency as a Cultural Fiction References Index
Add to Wish List
eBook for individuals
978 1 78195 298 6
From $40.00
Click here for options
eBook for library purchase
978 1 78195 298 6
View sample chapter and check access on:

How to be a Reflexive Researcher